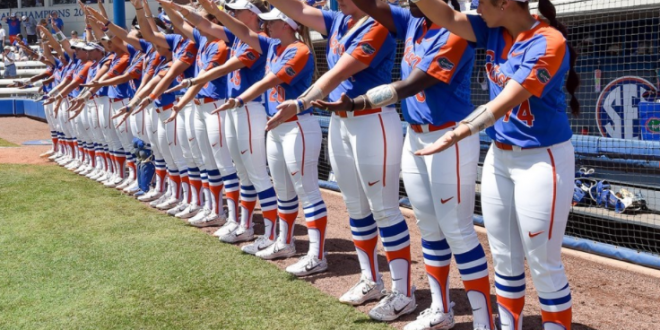 The Florida Gator softball team (53-7) earned the Gainesville Regional title after bouncing back 5-0 against the OSU Cowgirls (38-25) in Game 7. Florida advances to the NCAA Super Regional after falling 1-0 against Oklahoma State in Sunday’s early game.

Despite racking up 13 strikeouts and giving up just one run on three hits, Florida sophomore pitcher Kelly Barnhill shouldered the loss and fell to 23-2 on the season. OSU’s Brandi Needham earned the win and improved to 21-10 after pitching a complete game, allowing seven hits.

The Gators and Cowgirls both struggled to find offense in the early innings of game one. Florida’s first three batters all made contact, but only Nicole DeWitt got on base with a single to centerfield. Kayli Kvistad lined out into a double play to end the top of the first.

Vanessa Shippy gave OSU a promising start to the day with her single to left field, but then she was called out after leaving first base early.

In the top of the second, Florida’s only offense came from Aleshia Ocasio’s double to left field. Barnhill stifled Oklahoma State’s batters with nine strikeouts through the first four innings.

In the top of the fourth, Oklahoma State avoided a huge momentum swing with some clutch defense. Janell Wheaton led the inning off with a single before Jordan Roberts followed up with a single of her own to centerfield. Ocasio drew a walk to put three runners on.

Chelsea Herndon would end the inning with a chipper down the left field line that led to a double play for the Cowgirl defense.

OSU struck first with a 1-0 lead in the bottom of the sixth, as Shippy sent in an RBI double that proved to be the winning run.

Florida fought back hard and didn’t let up against OSU, earning a 5-0 win in Game 7.

Shea Coats (8-10) earned the loss for Oklahoma State, while Florida’s Delanie Gourley improved to 20-4 this season.

With the threat of elimination on the line, Florida wasted no time drawing blood in the second game.

Amanda Lorenz opened up the first inning with a lead off double down the right field line. Nicole DeWitt then followed up Lorenz’s at bat with a 2 RBI homerun past the right field wall.

DeWitt said the Gators didn’t focus on the previous loss. “You can’t change the outcome, so we were just trying to come out and be ourselves.” DeWitt explained. “It was just exciting to bounce back like that.”

Lorenz extended a 3-0 lead over OSU with a sacrifice fly RBI in the bottom of the second.

Gourley pitched all seven innings, allowing just one hit and totaling 11 strikeouts. Walton said he had “a lot of confidence” in Gourley, and she served as a catalyst for the win.

For the 10th time in program history the #Gators will host an NCAA Super Regional‼️ pic.twitter.com/4HL5Jp9CJ2

Now Florida will prepare to host Alabama. The NCAA Softball Super Regionals will take place between May 25-28.