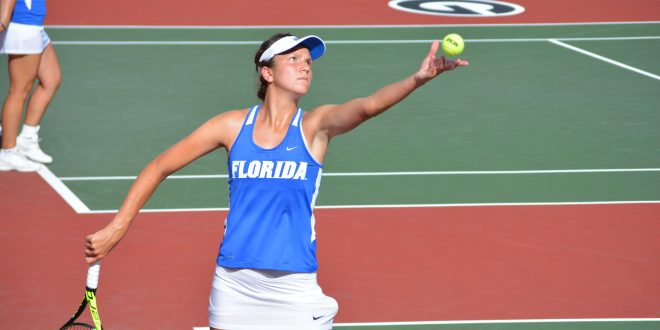 The Florida women’s tennis team advanced to the Final Four after taking down ninth-seeded Oklahoma State in the NCAA quarterfinals on Sunday. The top-ranked Gators improved their record to 27-3 and 10-0 all-time against the Cowgirls with the win.

The Gators are now 25-5 all-time in NCAA quarterfinal action. This marks the 25th time in the last 31 years the team has advanced to the NCAA semifinals.

Roland Thornqvist’s squad has won 14 of their last 16 matches. The two losses during the stretch have come at the hands of the Vanderbilt Commodores, the most recent of which came in the SEC Tournament final. The Gators will square off against Vanderbilt for a third time in the NCAA semifinals today at 2 p.m. The match was previously scheduled for 4 p.m. but has been moved up to avoid possible late rain.

Despite the two losses earlier this season, the Gators boast a 48-7 record all-time against the Commodores and are 4-1 in NCAA tournament meetings. However, Vanderbilt has won five of the six most recent meetings between the two schools.

I'm an above-average golfer with surprisingly great touch around the greens. Click on my twitter link for some sports talk.
@Ry_McGinn
Previous Gator Softball Bounces Back Against OSU, Advances to NCAA Super Regional
Next SEC Conference Flexing Muscle in NCAA Softball Tournament