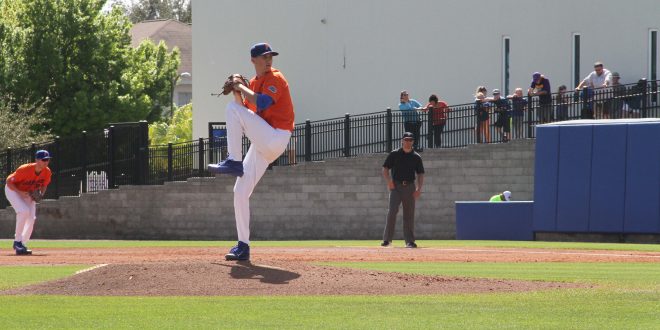 After a beat down on Thursday night, the Florida baseball team wins games on Friday and Saturday to clinch the regular season SEC title. This is the first time the Gators win the SEC since 2014 and the first time they beat Kentucky in a series since 2012. On Saturday, Florida won 6-4 to win the SEC title for the fourth time under coach Kevin O’Sullivan.

Sophomore pitcher Jackson Kowar improves to 10-0 on the season. He is the only pitcher in the conference to have double digit wins.

It was a rough outing to start the game. In the first inning, Kentucky’s Luke Becker doubled to drive home a run and in the third, Zach Reks plated another run for the Wildcats with a single that gave them an early 2-0 lead.

Kowar would settle in and only allow three hits in the next three innings.

In the seventh after walking Tristan Pompey with one out, Kowar’s day was done. He pitched 6.1 innings, allowing eight hits and two runs while striking out four in 95 pitches; a very solid day for the young righty.  Senior Frank Rubio would come in, allow a hit, and he was removed for lefty Nick Horvath. He worked out of a jam, leaving the bases loaded.

Gator closer Michael Byrne then came in an inning early to shut down the Wildcats. Marcus Carson did hit a two-run home run to cut the lead to 6-4 in the eighth but Byrne retired the Cats in order in the ninth to preserve the win.

The Gators entered the fourth inning without a hit. Kentucky pitcher Justin Lewis was keeping Florida off balance early on. The momentum of the game shifted after Dalton Guthrie singled off Lewis to start the fourth.

Guthrie hustled down the line and leaped toward the first base bag and in doing so, sprained his ankle.   Blake Reese entered for the junior shortstop who was seen with a boot on the ankle after the game and there is no definitive timetable for his return.

JJ Schwarz immediately followed Guthries’ hit with a double, giving the Gators runners in scoring position with no outs. Nelson Maldonado then homered off Lewis and gave the Gators a 3-2 lead.

In the very next inning, Maldonado doubled to plate Ryan Larson and got another run on an RBI ground out from Austin Langworthy.  Florida scored its final run in the sixth on an RBI single from Blake Reese.  After the game, Florida coach Kevin O’Sullivan said he was proud of what his team has accomplished.

Right now, the Gators will monitor Guthrie closely. Since it’s just a sprain, his ankle should be ready for the start of the NCAA Regionals.

Florida has a first round bye in the SEC Tournament next week. They will not play until Wednesday.