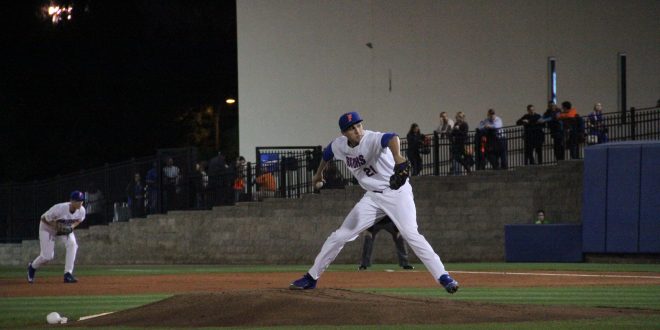 In a game that went late into the night, the top-seeded Gator baseball team left it until late in the game to score the game-winning run in its first game in the SEC Tournament.  A bases-loaded walk by Christian Hicks in the eighth inning snuck Florida past Auburn 5-4 in a game that ended at 2:05 a.m.

We hope you enjoyed this edition of #SECAfterDark. @GatorsBB takes a 5-4 victory from the Tigers! pic.twitter.com/oshH3csZl4

The win marks Florida’s first victory over Auburn on the season after getting swept by the Tigers at the start of SEC play. It is also Florida’s 13th win in its last 14 games against SEC opponents dating back to the regular season. Florida will now take on the winner of the Mississippi State-Arkansas game in the next round on Friday.

Alex Faedo turned in a strong start for the Gators, going six full innings, while tallying seven strikeouts and allowing just one earned run. Tyler Dyson earned the win for Florida after tossing 1.1 scoreless innings in relief for the last part of the seventh and the entire eighth inning. Michael Byrne broke a school record for the Gators with his 14th save of the season, preserving the one-run lead for the Gators in the ninth inning.

In a game that started off with some light rain, the Gators started off on the front foot, looking to avenge the sweep suffered at the hands of Auburn.

The scoring for Florida started in the third inning, thanks in part to an Auburn error. Mike Rivera, back for the first time since suffering a hand injury against Florida State in early April, popped up to shallow right center. The second baseman, Jay Estes, failed to make the catch, and the error put Rivera on base. Rivera made it to second on the play to put himself in scoring position. On the next at-bat, Deacon Liput took a 1-2 pitch for a single to right-center, driving home Rivera, and giving the Gators the 1-0 lead.

The fourth inning provided the bulk of the scoring for Florida, as they stretched the lead to 4-0 by the end of the inning.

Jonathan India (2-4, RBI, run) continued his hot hitting, scoring J.J. Schwarz (2-3, 2 runs) with an RBI-single through the left side. Christian Hicks (1-3, 2 RBI) followed that up with an RBI-double before Mark Kolozsvary made it a four-run game with an RBI single.

#MarkoKolo with a RBI single to left and #Gators lead 4-0!! pic.twitter.com/S3RFjDkvXt

The rain had subsided as the game went on, but it picked back up in the seventh. And as the rain picked up, Auburn made the runs rain as well, coming all the way back to tie the game in the inning.

Faedo started the inning by allowing a leadoff single and a walk. Florida head coach Kevin O’Sullivan decided that was enough, and pulled him in favor of Frank Rubio.

Faedo gives up a single and walk to start the seventh, that'll be all.

Auburn loaded the bases on the only at-bat Rubio pitched, and Nick Horvath came in to try to get out of the jam.

He wasn’t able to do so.

Jonah Todd, the Tigers’s best hitter with a .390 average on the season, but the ball in play, and a throwing error from India at third scored Auburn’s first run. Horvath then got a fly out and issued a walk before giving up a two-RBI double to Connor Davis. Dyson entered the game and the Tigers managed to come all the way back after a wild pitch scored the Tigers’ fourth run of the inning.

It's late and it's raining, but @AuburnBaseball still fighting, tie game 4-4 vs Florida headed to the 8th #WarEagle pic.twitter.com/ev1pSU3Voo

Auburn took the momentum with the game tied at 4-4, but patient at-bats from the Gators led to them scoring the eventual game-winning run in the bottom of the eighth.

Patience at the Plate Pays Off

First, Schwarz worked his way to a full count with one out before singling to right field to give Florida a baserunner. Horvath, who moved to center field after Dyson came in for him on the mound, earned a full-count walk after a nine-pitch at-bat. India followed that up with a single through the left side to load the bases.

The pressure then fell on Hicks, with the bases loaded and one out, and the go-ahead run on third. Hicks ended up seeing only one strike in his five pitch at-bat, getting the walk and bringing home Schwarz. The patience at the plate gave Florida the lead again, and they took that one-run advantage into the ninth inning.

That lead was all that Michael Byrne needed, as he etched his name in school history. Facing only four batters, he tossed a scoreless inning, and earned his school-record 14th save, an impressive feat for the sophomore who started the season as a mid-week starter for the Gators.

.@GatorsBB history in their 5-4 win over Auburn.

Michael Byrne set the single-season saves record with his 1️⃣4️⃣th save of the year. pic.twitter.com/62lNtJnbFC

Because of the late start and end time of the game, Florida won’t play again until Friday at noon. They’ll take on the winner of Mississippi State and Arkansas, two teams that the Gators have not faced at all this season.