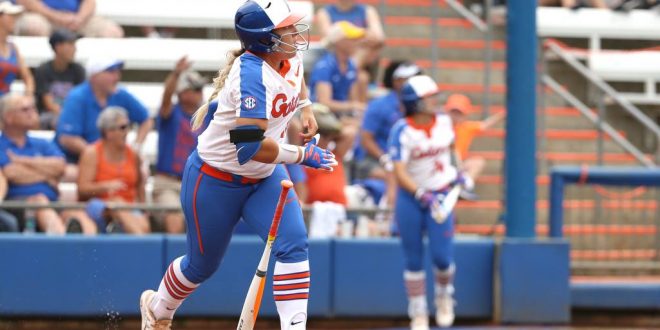 Preview: Gator Softball Gears Up for Alabama in Super Regional

The top-ranked Florida softball team starts play in its Super Regional on Thursday at home and will face a familiar foe in the Alabama Crimson Tide.  Florida, 53-7, won its NCAA Regional last weekend at home to advance and Alabama did the same at home.  This will be the 67th time the two teams have met, but the first time for the 2017 season.

Alabama is 45-16 on the season. The Gators are 31-35 when facing them, but hope to change that number on Thursday night. Last weekend, In its regional, Alabama knocked off a Minnesota team that had won 54 games on the season with excellent pitching and sound defense.

Their offense deserves credit too.  Alabama’s Chandler Dare and Marisa Runyon are a duo that reminds Gator fans of the Amanda Lorenz/ Nicole DeWitt pairing at the top of the lineup. The Tide had offensive issues in its regional and if both teams play to their strengths we might not see a lot of runs scored in this Super Regional.

Three of Florida’s pitchers have been in the top 10 in several national pitching categories throughout this season. Kelly Barnhill, Delaine Gourley, and two-way player Aleshia Ocasio all have dominated from the circle. In Florida’s first two games of its NCAA Regional, the Gators gave up a total of one hit.   In fact, the Gators allowed only one run in four games.

Florida’s offense has been a bit up and down, especially in the postseason.  But when it is right, the Gators get runners on base, use small ball to move runners along and then get timely hits to drive home the runs.   Florida is capable of the long ball as well as Amanda Lorenz leads the team in homers with 10 and hits .379 usually hitting in the leadoff spot but usually runs have come from stringing hits together and using the stolen base and other small ball tactics.

This Super Regional round will put out eight teams across the country and those eight will head to Oklahoma City for the Women’s College World Series the first week of June.This weekend fans can expect a full stadium and a great game. The games in Gainesville will be at 7 p.m. on Thursday, 7 p.m. on Friday, and 5 p.m. on Saturday if necessary. All three will be aired on ESPN.

Previous Gator Baseball Pushes Past Auburn 5-4 to Advance in SEC Tournament
Next NBA Playoff Preview: Cavaliers Look to Close Out Celtics in Game 5