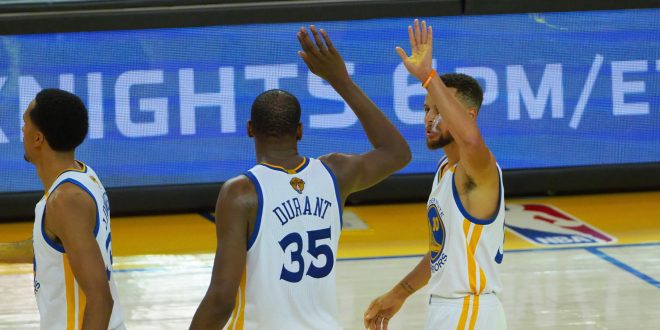 Durant and Warriors dominate Cavs in Game 1 of NBA Finals

It usually takes some time to get comfortable when someone revisits a place they have not been in five years. However, that was not the case for Kevin Durant Thursday night in Game 1 of the NBA Finals.

The Golden State Warriors defeated the Cleveland Cavaliers 113-91 with the contribution of Durant’s 38 points, eight rebounds and eight assists. Durant became only the fourth NBA player to score 25 points in his first six NBA Finals games.

Kevin Durant: a lot of points, no turnovers. pic.twitter.com/eKIhVMZ65D

Stephen Curry was another member of the “Big Four” who made his presence known. Curry scored 28 points along with 10 assists and six rebounds. Despite Durant and Curry’s impressive performances, the Warriors shot just 42.5 percent from the field, which is their lowest of the 2017 postseason. That does not hurt a team’s chances much when the opposing teams shoots 34.9 percent, though.

LeBron James notched a double-double with 28 points and 15 rebounds, while Kyrie Irving added 24 points. With the exception of LeBron, Irving and Richard Jefferson, no other Cavaliers players shot above 40 percent. To put the poor shooting performance into perspective, the Cavs were 34.9 percent from the field and 35.5 percent from the three-point line. More times than not, teams shoot significantly better from the field than beyond the arc.

Turnovers. It is a significant reason for the outcome of Game 1. Due to the Warriors up-tempo play style, the last thing an opposing team can do is turn the ball over.

Unfortunately for the Cavs, turnovers came by the handful as Cleveland finished the game with 20 turnovers. The Warriors capitalized, producing 21 points off turnovers.

On the complete opposite end of the spectrum, the Warriors tallied just four turnovers, tying the NBA record for fewest turnovers in NBA Finals history. Actually, the most impressive statistic of Durant’s  38-point performance is this: zero turnovers.

The Warriors did one better than tie a record Thursday night: they set one. With the win, Golden State became the first team to have a 13-0 record in the postseason.

Where to Watch: ABC