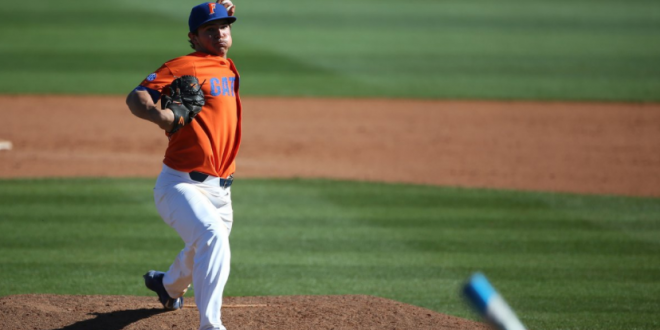 The Florida Gators can breathe a sigh of relief after taking down a pesky Bethune-Cookman bunch on Monday night by a score of 6-1. After losing a 6-2 Sunday night meeting between the two schools, Florida was facing elimination from an unlikely foe.

Monday’s game featured two teams in search of quality innings from exhausted pitching staffs. The Gators were searching for a breakout performance from an unlikely source. Well, Florida’s wish was granted when they saw their biggest contribution come from freshman Austin Langworthy.

Kirby McMullen started for the Gators, the first of his career. He pitched 2.2 innings and was sharp through the first two, surrendering only one hit that was later cleaned up by a 6-4-3 double play. He started running into trouble in the second inning when he gave up back to back two-out singles. That’s when Florida decided to turn to Langworthy. According to head coach Kevin O’Sullivan, the Florida coaching staff had planned to only throw Langworthy for two innings. The plan was tossed in the trash when Langworthy found his groove on the mound.

The freshman lefty finished his night in the seventh after four innings of relief work. He gave up just one run on two hits and one walk. He finished with three strikeouts. The Gators then turned to their consistent closer Michael Byrne to put the nail in Bethune-Cookman’s season. Byrne finished the last 2.1 innings for Florida. He gave up no runs on two hits and struck out two. O’Sullivan says he didn’t really want to use Byrne but felt he needed to with the season on the line.

After losing the first game of the regional to USF, Bethune-Cookman ended up playing in four games over the course of the weekend prior to this Monday night match-up. Considering they were running low on rested arms, the Wildcats persevered with quite the early pitching performance. They held the Gators scoreless through five innings.

It took a couple of errors from first baseman Danny Rodriguez to give Florida the spark they needed to push across their first runs of the game. After a one-out single for the Gators from Nelson Maldonado, Mike Rivera popped one up along the first base line. It looked as if Rivera and Rodriguez were on a collision course but Rivera avoided Rodriguez and the ball eventually fell dropped in fair territory. Maldonado reacted quickly by scurrying to second. Rodriguez then committed his second error of the play attempting to throw out Maldonado at second. Maldonado advanced to third and Rivera advanced to second on the error. After the game, Bethune-Cookman head coach Jason Beverlin explained the play from his perspective.

As great as Langworthy was on the mound, he played an even more important role at the plate in the sixth. After the two errors from Rodriguez, Langworthy provided his own pitching support with a three-run home run to left field.

Florida would later add to the lead with a Guthrie RBI single to make it 4-0 in the seventh. Michael Byrne even pitched in with a sacrifice bunt in the eighth to move a pair of runners to second and third with one out. Horvath capitalized on Byrne’s execution by scoring Langworthy on a sacrifice fly to left to extend the lead to 5-1. The Gators then added one more in the ninth with a Maldonado RBI single to score India. That made the lead 6-1, the eventual final score.

Florida now moves on to face Wake Forest in Super Regionals. They’ll play in a best of three series hosted by the Gators at Alfred A. McKethan Stadium. O’Sullivan says the Gators plan on going with their usual rotation of Alex Faedo, Brady Singer and Jackson Kowar.

I'm an above-average golfer with surprisingly great touch around the greens. Click on my twitter link for some sports talk.
@Ry_McGinn
Previous Gator Softball Falls in Game 1 of Record Setting WCWS
Next PREVIEW: The Tampa Bay Rays and Chicago White Sox Meet For A Three-Game Series