Home / NBA / End of an Era for the LA Clippers 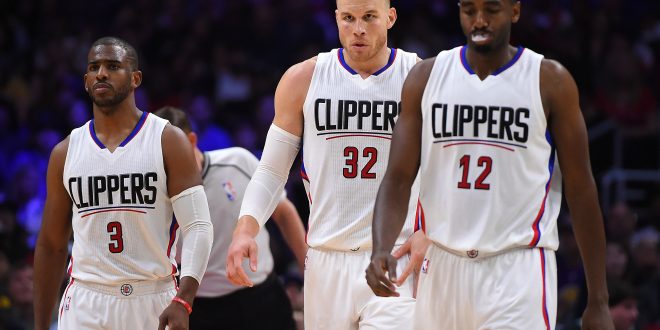 End of an Era for the LA Clippers

Chris Paul's trade to the Rockets has everyone talking. https://t.co/DiuiUCZeeL

Chris Paul came to the Clippers back in 2011 after playing for the New Orleans Hornets from 2005-2011. The 6-foot, 175 lb. point guard has served as a key asset for the Clippers for the last six seasons. Last week, the two star players for the Clippers, Blake Griffin and Chris Paul, told the Clippers that they are going to decline their player option for the 2017-2018 season and become free agents. Sources say that Paul chose to decline his player option because he wanted to play with Rockets All-Star James Harden.

What does this mean for the Clippers?

With the loss of Chris Paul, Los Angeles will definitely have to form a new direction as they head into the next season. For the past 6 seasons, Chris Paul has been the face of the franchise. While the Rockets have agreed to trade Sam Dekker, Patrick Beverley, Lou Williams, and a top-3 protected 2018 first-round pick in exchange for Paul, it is difficult to see how these players will be able to compensate for the drive and tenacity CP3 brought on the court.

The Clippers with & without Chris Paul pic.twitter.com/ljTjApNVQm

Despite having Paul and Griffin as a powerhouse for the Clippers, the franchise has yet to claim a conference title or championship, so it is inevitable that there would be rebuilding. Back in 2013, Doc Rivers left the Celtics to be the head coach for the Clippers and many thought he would be able to help bring home a championship to Los Angeles. However, now that Paul has left and Griffin more than likely following suit, the franchise will have up to $23 million in cap space; this number can possibly rise to $70 million during the offseason. There is also rumor that JJ Reddick will also leave as a free agent and move to Philadelphia or Brooklyn, which will really cause the team to completely rebuild.

With CP3 gone, have to wonder if Doc Rivers is up for another rebuild, which was a BIG factor in him wanting out of Boston in 2013.

Now, there is speculation if Rivers will even want to stick around if he is going to have to reshape the franchise. Regardless, the LA Clippers will now have to focus on rebuilding their franchise.

With Chris Paul joining Houston, one has to imagine that Blake Griffin's free agency is a free-for-all.

Some say he will go back to his hometown and play with Russell Westbrook in Oklahoma City. At this point, anything is possible.

What does the trade mean for Chris Paul?

LA is where Chris Paul really grew as the incredible player he is today. This was definitely hard for teammates, the franchise, fans, and even Paul himself to accept. Paul tweeted this a few hours after the trade was announced:

Now that Paul is playing with Harden in Houston, the Rockets have a legitimate title contention. This truly is a blockbuster move that will give the Rockets the most backcourt firepower in the NBA.  Both Harden and Paul are two incredibly strong offensive players. However, will the two be able to share the court? Harden has not played with another ball-dominant guard since his time in OKC with Westbrook, and Paul has never played with a guard like Harden. In the past, the two have proven not to be successful on the court together; so one player will have to sacrifice the ball for the other. Despite each other’s dominate nature on the court, the two players have the ability to overpower the reigning Western Conference champions– the Warriors.

What does this mean for the NBA?

This is exactly what the NBA needed. The Clippers have stellar players, but despite their best efforts, they have not been able to make it past the second round of the playoffs. Trading LAC’s best players might give other teams the chance to claim titles. With CP3 now in Houston, this upcoming season is sure to be exciting.