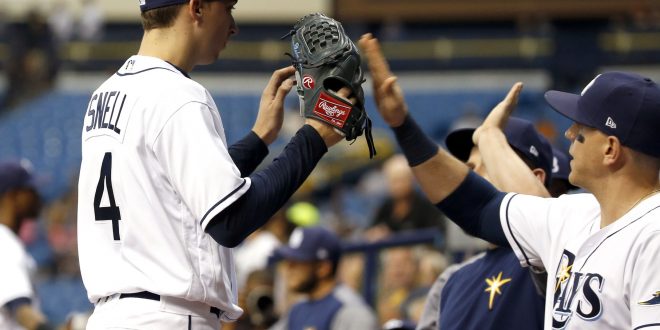 On Tuesday night, the Rays took down the Pirates 4-2 in an extra-inning game at PNC Park. Tampa Bay is three games back from Boston for first in the AL East. Blake Snell (0-4, 4.71 ERA) rejoins the Ray’s pitching staff after a seven game stint in Triple-A to work on his command and control. Snell commented earlier in the season about his frustration missing strikes. Snell hasn’t won since 2016. Ivan Nova (7-5, 3.06 ERA) takes the mound for the Pirates tonight.

Tampa is tied for the wild card with Minnesota. The Twins face Boston tonight. With three games in three days, Tampa could put themselves in a position to threaten Boston and New York for the division.  Tampa Bay’s defense also improved after trading for SS Adeiny Hechavarria.

The Rays were in desperate need of a SS since the start of the season when projected starter Matt Duffy suffered a season-ending heel injury.

The Tampa Bay Rays acquired Hechavarria from the Marlins on Monday afternoon. Miami received two minor league prospects in exchange. Neither Braxton Lee nor Ethan Clark have impressed thus far in their MiLB careers, so the trade equates to a salary dump for Miami. The move clears $4.3 million for Miami.

Through four seasons with Miami and in his career, Hechavarria has been limited offensively. He owns a career .255/.291/.337 slash line in 641 games. His new team hopes his defense makes up for it.

Rays fans got a glimpse of the shortstop’s defensive prowess yesterday when he stopped a screaming grounder that looked to be sure base hit for Josh Bell.

Hech got that range, though. pic.twitter.com/yXMRCWQzLo