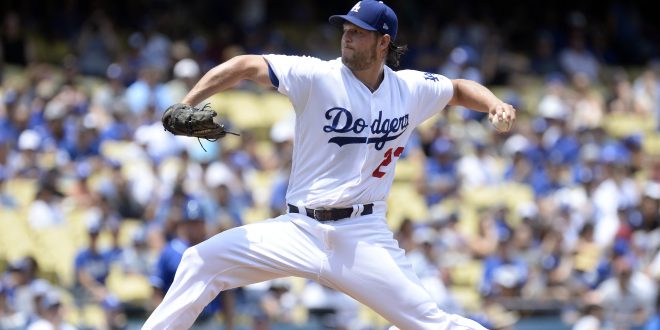 The MLB regular season has officially reached the halfway mark with the 2017 All-Star Game set to commence on Tuesday. The Houston Astros and Los Angeles Dodgers have emerged as World Series front runners, but there are plenty of teams with reason to be optimistic. Here’s a breakdown of the first half of the season.

The Dodgers are the only 60-win team in the National League and they come into the All-Star break steaming hot. They’re currently on a six-game winning streak and are led by ace Clayton Kershaw. He has won his last seven starts and leads the MLB with 14 wins on the season.

The Washington Nationals appear to be the biggest obstacle in the way of a World Series appearance for the Dodgers. The heart of the Nationals lineup has been an offensive juggernaut. Daniel Murphy, Ryan Zimmerman and Bryce Harper have the three best batting averages in the National League. They also have an ace of their own that can go toe-to-toe with Kershaw. 2016 Cy Young Award winner, Max Scherzer leads the majors with a 2.10 ERA.

The Milwaukee Brewers lead the NL Central and are perhaps the most unexpected contender in baseball. They won the rubber match of a weekend series against the New York Yankees behind a three-run home run from third baseman Travis Shaw. The homer is Shaw’s 19th of the season and yet he does not lead his team in the category. That title belongs to first baseman Eric Thames who has 23. The Brewers success is sustainable if they continue to see this level of production from Shaw and Thames.

The Houston Astros have the biggest division lead in baseball with a 16.5 game lead over the Texas Rangers and Los Angeles Angels. They’re led by the dynamic middle-infield duo of Jose Altuve and Carlos Correa. They’ve been the most consistent team in the American League to this point.

The Boston Red Sox and Cleveland Indians have been locked in tight division battles all season long. The Red Sox have been relying heavily on the services of off-season acquisition Chris Sale and resurgent closer Craig Kimbrel. The Indians have also been able to depend on a consistent arm. Starting pitcher Corey Kluber has a 2.80 ERA, good for third best in the American League.

While the Dodgers and Nationals do have substantial leads in their respective divisions, there are some National League squads lurking closely that can make serious noise in the playoffs. The Dodgers don’t have to look any further than their own division to find a team with postseason potential.

The Arizona Diamondbacks have cooled down a bit of late but are led by veteran stars. First baseman Paul Goldschmidt, who has a career batting average of .300, is quietly having one of the best years of his career. The top of the Diamondbacks’ rotation would also present a daunting match-up for any team in a playoff series. Zach Greinke and Robbie Ray have been two of the best starters in the league this season.

The Colorado Rockies currently hold the second NL wild card position. Third baseman Nolan Arenado has taken the league by storm and has 70 RBI this season, tied for first in the league. He’s part of an offense that is hitting a collective .270 on the season.

If the postseason were to begin today, the AL East would have three teams in the playoffs. The Tampa Bay Rays and New York Yankees are both just three and a half games back of the Boston Red Sox. The complete wild card standings can be seen here.

The Milwaukee Brewers’ first place standing in the NL Central can at least be partially attributed to the poor performance of the Chicago Cubs. The 2016 World Series Champions aren’t even at .500 at the All-Star break. Manager Joe Maddon says his team is frustrated and justifiably so. The Cubs won a MLB-best 103 games last season. The San Francisco Giants have been equally as disappointing. After making the playoffs last season, the Giants currently have the second worst record in the National League. Manager Bruce Bochy says production in the first half of the season has been unbalanced.

The 2017 season has also supplied a pair of rookie sensations. Cody Bellinger has contributed heavily to the Dodgers’ success with 25 home runs and 58 RBI. He’s presumably the front runner for National League Rookie of the Year. In the American League, the Yankees’ Aaron Judge is not only contending for Rookie of the Year but also MVP. His 30 home runs this season are the most ever by a Yankees rookie.

Aaron Judge passes Joe DiMaggio for most HR by a Yankees rookie!

We are all witnesses. #AllRise pic.twitter.com/PcMAddtYsa

A number of teams teetering on the brink of falling out of contention are likely to begin exploring trade options. The Oakland Athletics and Chicago White Sox are currently both seven and a half games back in the American League wild card standings but they are last in the standings. Pitchers Jose Quintana and Sonny Gray are two players that could potentially be wearing different uniforms before the July 31st trade deadline.

Another name that has been floated around in trade rumors is San Francisco Giants starter Johnny Cueto. He’s a three-time all-star that could provide support to a contending team’s pitching staff down the stretch.