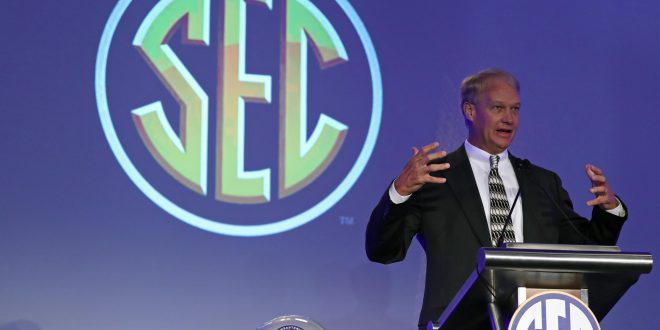 Kirby Smart enters his second year as the head coach of the Georgia Bulldogs. Georgia signed the nation’s third best recruiting class, which featured 18 ESPN 300 members and four five star prospects. They have 10 defensive starters returning and a developed Jacob Eason, who is entering his second season as well.

Eason is accompanied by arguable the best running back duo in the country: Nick Chubb and Sony Michel.

When asked on what he wants to see from his offense during fall camp, Kirby was quick to answer.

Georgia is predicted to win the SEC East by 37% according to ESPN.

According to head coach Derek Mason, his team is on the rise after making its first bowl appearance during the 2016 season.

“Right now, this team is on the rise, Vanderbilt is on the rise. You look at recruiting to where we are at football-wise and what we’ve done on the academic side of it, that’s what Vanderbilt wants to be.” — Derek Mason

The Commodores have had a lot of success with starting quarterback Kyle Shurmur against conference opponents. Shurmur closed the regular season throwing for 689 yards, four touchdowns and only one interception.

Vandy also has Ralph Webb coming back, a Gainesville-native who had a stellar season last year.

The Mississippi State Bulldogs are hoping Nick Fitzgerald can take the team to another successful season. Fitzgerald threw for 2,423 yards with 21 touchdowns and 10 interceptions as a sophomore. He produced three games with at least 300 yards passing against Massachusetts, Samford and Arkansas.

The Bulldogs will have many of their starters returning inlcuding seniors Gray, Rankin, Harris, Cory Thomas, Braxton Hoyett, Brandon Bryants, and Tolando Cleveland.

Florida’s day will be recapped in another article.

Day 3 of the SEC Media Days will begin coverage on Wednesday at 10 a.m. Alabama, Missouri, Texas A&M, and Kentucky will take the podium.