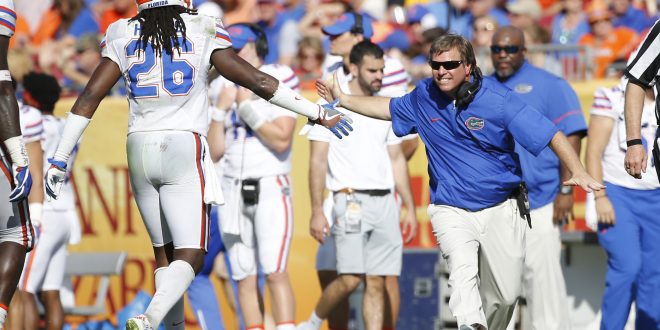 BREAKING: Gators safety Marcell Harris out for the season

The Florida Gators football team suffered devastating news on Thursday when it was announced that safety Marcell Harris would be out for the 2017 season with a torn Achilles tendon.

How big of a loss will this be?

Harris was the football team’s leading tackler in 2016 with 73 tackles. He was especially good in his last four games when he racked up 38 tackles, an average of 9.5 tackles per game. Harris also had a forced fumble, two interceptions and a pass defended in 2016.

Losing Harris is a huge blow for a team that’s losing key defenders such as Jarrad Davis, Teez Tabor, Quincy Wilson and Caleb Brantley. To make matters worse for the secondary, cornerback Chris Williamson will reportedly transfer. Florida’s secondary will enter the 2017 season with a lot of question marks. Who will step up in Harris’ absence? How will the team adjust to the transfer of Williamson? What freshmen will be thrust into the spotlight?

Looking at the options

With Harris gone for the season, McElwain will have his hands full. But he does have viable options. Cornerback Chauncey Gardner, the MVP of the 2017 Outback Bowl, is more than capable of stepping up. The rising sophomore was highly recruited as a senior in high school, ranking 47th overall and fourth among players at his position, per 247sports. He had a solid freshman season, but really made a name for himself in the 2017 Outback Bowl when he grabbed two interceptions including a pick six. There’s a very strong chance that Gardner gets moved to safety to fill the void. He will likely have competition with Jeawon Taylor and Quincy Lenton

In addition, the Gators have a number of talented freshman defensive backs coming in. This includes Brad Stewart, Marco Wilson, Christopher Henderson, Brian Edwards and Donovan Stiner. With a secondary that’s very thin, it’s very possible that any of these players get put into starting positions at one point.

The Gators will open the 2017 season against the Michigan Wolverines in AT&T Stadium in Arlington, Texas. The last time these two teams met, the Gators got clobbered 41-7 in the 2016 Citrus Bowl. The Gators obviously want a chance at redemption, but the loss of Harris will make it very tough.