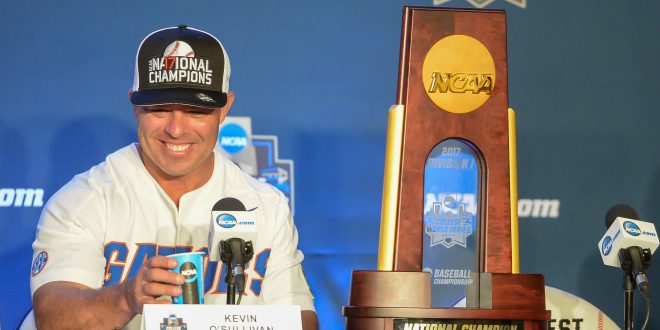 On Wednesday, the National College Baseball Hall of Fame named University of Florida baseball coach Kevin O’Sullivan the national coach of the year as he wins the Skip Bertman National Coach of the Year Award.

After an incredible season, it comes as no surprise O’Sullivan received such high recognition. O’Sullivan led Florida to the program’s first national title at the 2017 College World Series.

Check out everything from the 6-1 win, and all the celebration after! #GoGators pic.twitter.com/YwbyOClmOT

The Gators had a historical performance during the College World Series. During the last five games, Florida did not commit a single error, an all time record for that time span.  In addition, the  Gator pitching staff fanned 68 batters over six games. This was the second highest total by a national champion.

Florida not only had an incredible performance at the College World Series, but also a phenomenal overall season with the record of 52-19.

And to top off an amazing season, eight players from the 2017 team were chosen in the 2017 Major League Baseball First-Year Player Draft, four of them in the top seven rounds, as well as the 18th overall pick, right-handed pitcher Alex Faedo. Since 2008, when he began coaching for the Gators, O’Sullivan has had 77 players taken in the draft.

Coach O’Sullivan said in an interview, “It’s hard to get your program to be one of the elite in the country, but it’s even harder to stay there.” This was Florida’s third straight appearance at the College World Series. 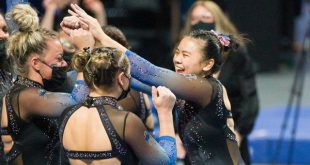