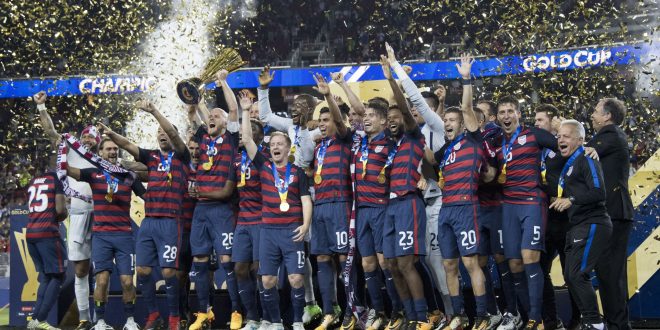 It wasn’t pretty, but the United States men’s soccer team got it done against Jamaica in the Gold Cup Final, winning 2-1 at Levi’s Stadium in San Francisco.

The U.S. dominated possession throughout the game and had almost 70% possession alone in the first half. Jamaica sat deep in their own end, but broke on the counter attack any chance they could using their pace on the flanks.

Tactically, head coach Bruce Arena allowed American midfielder Kellyn Acosta to push high up the field in order to link up with forwads Jozy Altidore and Jordan Morris. There were a couple exchanges between these players that created goal scoring opportunities, but they couldn’t find the net.

It wasn’t until a free kick from 27 yards out opened up the scoring in the Gold Cup Final. Jozy Altidore hit it sweet and true, soaring into the back of the net from way out. Taking the lead right before half-time.

Set pieces have been a difficult thing for the United States to defend against. It seems as though every big corner or free kick opportunity their opponents cash in. Jamaica’s first shot on goal came from a corner that found Je-Vaughn Watson on the back post for a difficult tap in with Jordan Morris riding on his back. Morris switched off for just a second, being overpowered by Watson to stun the Americans early in the second half.

Morris would make amends for his defending mistake and he did so in the most critical time of the game. As the United States grew frustrated in the final attacking third of the field, a hopeful ball from Gyasi Zardes on the wing forced a bad clearance from Jamaica’s back line. Morris pounced on the opportunity, sending the goal scoring chance into the net for the game winner.

Jordan Morris has the clutch gene!

What This Win Means

Winning the Gold Cup goes beyond lifting a trophy in front of your regional rivals. The winner of the tournament gets the opportunity to play in the FIFA Confederations Cup which serves as a dry-run the summer before a World Cup. Most recently, the United States played in the 2009 FIFA Confederations Cup ahead of the South African World Cup. The U.S. played against top caliber teams such as Italy, Spain, and Brazil. Head coach Bruce Arena is unbeaten in the 14 games he’s coached the U.S. and has been stressing the team needs to get better in order to compete against the likes of the top teams in the world.

Originally from Ocala, Florida. University of Florida Class of 2017. Avid FIFA player willing to beat anybody. Follow me on Twitter for everything you need to know!
@JoshLaSelva
Previous O’Sullivan Named the Skip Bertman Award winner
Next QB Competitions Heating Up for Florida and Michigan