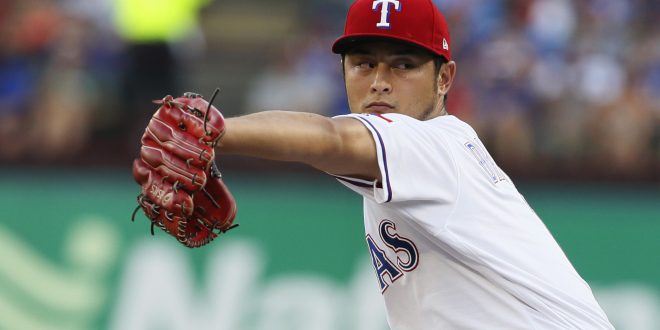 The MLB trade deadline is fast approaching; here are some players and teams that could be active.

Yu Darvish, Sonny Gray and Justin Verlander are a few of the big name pitchers being discussed in trade rumors. Darvish’s contract ends after this season. It would seem to make sense for the Texas Rangers to try to acquire some young talent in exchange for their ace, especially when they can potentially re-sign him in the off-season.

The Rangers may be on the fence about dealing Darvish because they are still just 4.5 games back of the final American League wildcard spot. The Oakland Athletics, on the other hand, are far from being in contention for a playoff spot. They’re seven games below .500 and are in complete rebuild mode. Sonny Gray has given up just six earned runs over his last six starts and there are plenty of teams in pursuit of a championship that could use the services of the Oakland ace.

The New York Yankees and Houston Astros are a couple of teams that could use pitching help. That help could also potentially come in the form of former American League MVP, Justin Verlander. He is struggling a bit this season with a 4.50 ERA but he boasts a 3.52 career ERA. The Los Angeles Dodgers are also rumored to have interest in Verlander.

If teams don’t want to give up too much for a big star like Darvish, Gray or Verlander, there are some alternative second-tier starting pitching options. Miami Marlins starter Dan Straily and Toronto Blue Jays starter Marco Estrada could both provide assistance to playoff-bound teams for a lower return.

Baltimore Orioles reliever Zach Britton is another name that has been floated around in discussions. Like Verlander, he has struggled a bit this season, but last year he had a 0.54 ERA.

The Astros are rumored to have interest in Britton, but they also may be looking for some positional help. Detroit Tigers infielder Jose Iglesias could provide short-term assistance at shortstop while young star Carlos Correa heals from injury.

The Tampa Bay Rays have also been busy on the trade market. They recently acquired reliever Steve Cishek from the Seattle Mariners in exchange for right-handed pitcher Erasmo Ramirez.

The official trade deadline is at 4 p.m. on Monday, July 31.

I'm an above-average golfer with surprisingly great touch around the greens. Click on my twitter link for some sports talk.
@Ry_McGinn
Previous Teddy Bridgewater Looking to Return From Knee Injury
Next MLB Hall of Fame Ceremonies This Weekend