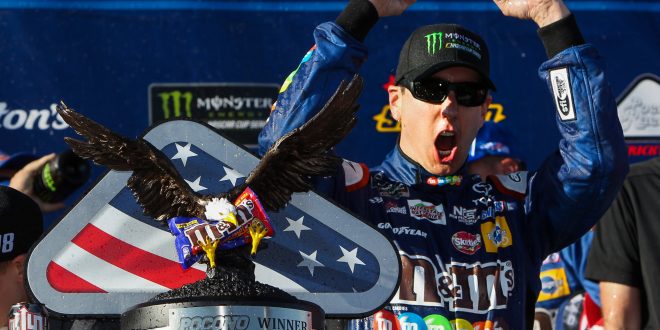 Kyle Busch Wins at Pocono For First Win Of Season

Kyle Busch has won for the first time in his career at Pocono Raceway by winning the Overton’s 400. The victory is also Busch’s first this season and 39th career NASCAR cup race win. He held on to win after taking the lead from Denny Hamlin with 16 laps left. Busch led on five different occasions for a total of 74 laps.

Busch entered Sunday’s race riding a 36-race losing streak despite leading 1,040 laps this season. The all-time record for laps led without a win was set at 1,078 by Harry Grant in 1981. Busch’s win marks the 100th NASCAR Cup win for Toyota since its 2007 debut. He has 35 of those wins.

Busch has now put together 13 straight years with a Cup win and has never gone a full season without a victory. Charlotte Motor Speedway is now the only track where he has not won a Cup points race. Busch was quick to attribute credit for the win to crew chief Adam Stevens and the rest of his team.

Kevin Harvick finished second, followed by Martin Truex Jr., Hamlin and Brad Keselowski. Seven-time NASCAR Cup champion Jimmie Johnson did not finish for the third time in the past four races due to a wreck. Dale Earnhardt Jr. finished 12th and says he’s happy with the finish.

Busch has clinched a spot in the playoffs and is currently in seventh place in the NASCAR Cup standings. There are now only three spots remaining in the 16-man playoff field. Earnhardt Jr. sits in 22nd place, but has won at three of the five remaining tracks. Truex Jr. retains his position atop the standings with 823 points. The full standings are listed here.

The Monster Energy NASCAR Cup Series now moves on to the road course at Watkins Glen International Raceway. Hamlin won the race in 2016.

I'm an above-average golfer with surprisingly great touch around the greens. Click on my twitter link for some sports talk.
@Ry_McGinn
Previous Jaguars Complete the First Three Days of Training Camp
Next Adrian Beltre Latest to Join 3,000 Hits Club