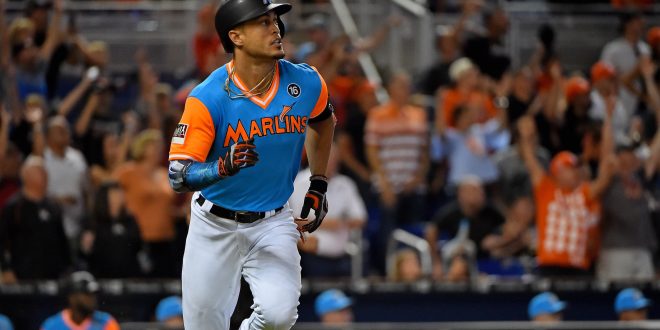 Miami Marlins baseball has been relatively dreadful over the past couple of years, but the fans had something to celebrate Sunday night when Giancarlo Stanton began to circle the diamond, becoming MLB’s newest player to reach 50-home runs.

STANTON IS THE KEY

Stanton not only got his 50th homer, but he did it with a tiebreaking hit in the eighth inning, helping the Miami Marlins sweep the San Diego Padres in a three-game series with a 6-2 victory. The Marlins’ three-game sweep and fourth consecutive victory left them with 13 wins in the past 16 games.

The Marlins are currently fighting for a Wild Card spot and need all the help they can get from the MVP candidate thus far.

Stanton’s 50th home run tied the record for second-most home runs in the month of August, leaving only Rudy York’s 18 home runs in 1937 ahead of him. Miraculously, Stanton is currently on pace for 63 home runs this 2017 season, according to SBnation.com.

After signing the most expensive contract in North American sports at the time, many believed that Stanton wasn’t worth the $325 million. But after three years from signing day, the California native has proved himself to be one of the most dominant players in the league.

Stanton won the home run title in 2014 and also won the Home Run Derby in 2016. All of this at only 27 years old and he’s still developing as a player.

With five weeks left in the regular season, it seems possible for Stanton to make his mark in history even if he has a couple of off days. He’s hit 24 homers in his last 41 games. Let’s just all hope that he doesn’t get too comfortable.

Recent grad from the University of Florida. Editing all articles on here while helping out the newbies. Love all things basketball.
@@MarcoJMartinez_
Previous 2017 US Open Preview
Next Blake Bortles Keeps the Jaguars Starting Job