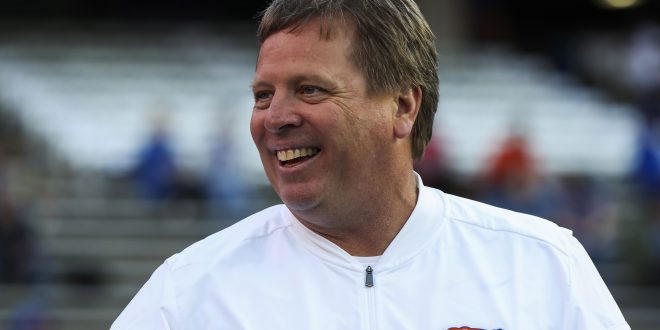 Still No Decision For the Starting Quarterback Position

Florida Gators football head coach Jim McElwain addressed the media today for the first press conference of the year regarding the season opening game this Saturday, September 2nd, against Michigan in Arlington, TX. Throughout the press conference, McElwain discussed who will be the starting quarterback in the season opener, the numerous suspended players, and team injuries.

Who Will Be the Starting Quarterback?

McElwain wants to keep everyone guessing about the quarterback position. He said they “have a plan that is in place.” Every quarterback is going to prepare like they are starting: studying the read options, quarterback runs, and being able to contain a guy in the pocket. McElwain mentioned that the opponent of this weekend’s game has nothing to do with the surprise in quarterback, and he believes the quarterback position will evolve throughout the season.

After being nagged throughout the press conference about not identifying who the starting quarterback will be, McElwain gave a hint in a joking manner (we think jokingly), saying that Kadarius Toney will be opening the game against Michigan with a wildcat formation. Whether this is true or not, McElwain is keeping everyone on their toes by keeping the starting quarterback a surprise.

The last time the Florida Gators and the Michigan Wolverines met was two years ago at the Citrus Bowl, where Michigan destroyed Florida 41-7. The Gators were not tough enough in their last matchup and need to be physical Saturday to have a chance. Michigan does a great job in getting their opponent into uncomfortable positions. They do a great job at forcing their opponents to lose on first and second downs.

Michigan is going to make plays on both sides of the ball. It all depends on how the players respond to those plays. The big key for the Gators will be how they handle the Wolverines upfront.

The Gators already play in an NFL stadium every year at the Everbank Field for the Florida-Georgia game. However, the dimensions are still the same as the fields here and in Michigan. Florida has not had many opening games like this in it’s history. McElwain is excited for the players to experience the opportunity to play in the Dallas Cowboys stadium.

McElwain says the unknown piece of the first game is more about your own team. The Gators are looking to take advantage of special teams this season by creating field position in the return game when given the opportunity. However, many of the Gators players are either injured or suspended.

McElwain believes the team should be in pretty good shape. C.J. McWilliams is still out, and Kemore Gamble is highly questionable. Gamble is getting his foot looked at tomorrow. Quincy Lenton came back to practice last week and moved pretty well. Kylan Johnson is still “iffy,”  but went through practice on Friday and is now expected to play.

Thankfully for the Gators, Florida has added new guys to their roster. According to McElwain, both a defensive lineman and an offensive lineman have transferred.

Seven of Florida’s players were suspended for the misuse of university-issued credit cards. The athletes used the cards to purchase electronics and then sell them for cash. One of these seven players was Antonio Callaway. On Saturday, Brandon Powell and Dre Massey will take over Callaway’s role in punt returns, and his kick off returns.

After James Robinson’s and Ventrell Miller’s citations for marijuana possession last week, McElwain announced during the press conference today that Robinson will not be playing in this weekend’s game. After already one strike, McElwain says he’s not giving up on him. Miller was already one of the seven players previously suspended.

Tyler Jordan and Nick Washington will be valuable players in the season opener. Jordan has had a really good camp, playing basically all five spots. McElwain says the team is going to count on him in their heavy packages. McElwain described Washington as a “glue force on the secondary and defense.”

Overall, the Gators need to focus on not letting the previous play affect their next play.

Sydney is a senior studying telecommunications with a specialization in sports media at the University of Florida. She is a multimedia sports reporter for ESPN 98.1 FM/850 AM WRUF and WUFT-TV.
Previous Blake Bortles Keeps the Jaguars Starting Job
Next Strong First Win for USF