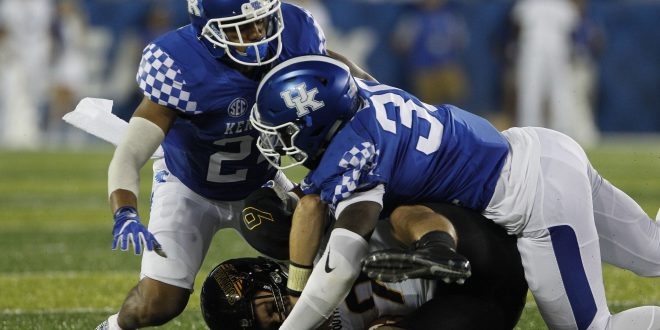 College football is back and Saturday will feature a highly anticipated face-off between two teams.  It’s been a year since Kentucky and Southern Mississippi played and both teams are looking forward to this rematch, but for different reasons. While the Kentucky Wildcats are determined to start the season on a good note, the Southern Mississippi Golden Eagles are looking for their second straight win against Kentucky.

The difference between this year and last is whether Kentucky learned from their mistakes. Last year, Southern Mississippi beat Kentucky 44-35. Kentucky and Southern Mississippi both ended last season with a record of 7-6. In a recent interview, Kentucky head coach Mark Stoops mentioned how the team needs to use last year’s game as motivation in order to prevent the same mistakes.

What Does Kentucky Need to do?

You can’t change the past, but you can certainly learn from it. According to Coach Stoops, that’s going to be the game plan. In order for Kentucky to not make the same mistakes as last year, Coach Stoops feels that the key to success is to not only maintain focus as a team, but on the game itself.  Stoops says the Wildcats have worked hard in camp, and now it’s time for them to put their skills to the test.

Even though the teams’ performances are important, it often comes down to the players’ individual performances. According to Coach Stoops, trust is important to him as a coach. Players like Eli Brown demonstrate the type of trust that Coach Stoops talks about. Stoops believes that by being able to trust his players it will give them more opportunities on the field.

The game between the Kentucky Wildcats and the Southern Mississippi Golden Eagles will take place on Saturday, September 2nd. Kick off is at 4:00 pm.