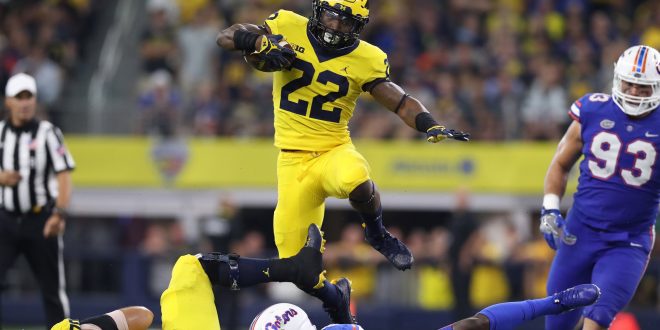 For the first time in 27 years, the Florida Gators football team lost in the season opener.

It took Michigan to bring the Gators down in a season opener. The game finished at 33-17 without the Gators putting up a single offensive touchdown in the entire game.

A season opener carries its own clout, but with the media antics played between Jim Harbaugh and Jim McElwain; questions surrounding UF’s quarterback situation; and the stage being set in the Dallas Cowboy’s stadium, the significance of this game may have a lasting effect for the respective teams.

The game can be epitomized in the final two minutes of the contest. Michigan controlled the line of scrimmage, as they had done all game, to force a safety on the Gators.

Both Feleipe Franks and Malik Zaire took snaps for the Gators, neither were able to elevate the offense to a productive level. Franks recorded 75 yards and Zaire contributed another 106 for a mere 181 passing yards.

Florida’s rushing was even more dismal with only 11 total yards.

The offensive line showed to be detrimental to the overall performance, despite the high hopes from the coaching staff.

At the start of year 3. At what point do we question Nussmeir as the OC at Florida ? #gators

It was the defense that saved the day from being a lopsided loss. Back to back interceptions were the Gators first touchdowns of the game.

Senior defensive back Duke Dawson snagged a pass intended for Michigan wide receiver Kekoa Crawford’s, but the ball tipped off of his hands and into the arms of Dawson.

If you hadn’t heard of who put the Gators second touchdown on the board, you’re not alone. CJ Henderson, a true freshman from Miami, made his first mark in the program intercepting an overthrow by Wolverines quarterback Wilton Speight and running it back to put Florida up 17-13 in the second quarter.

#Gators fans right now trying to figure out who these playmakers are pic.twitter.com/62PewvUmqR

The true dominance of Michigan came at the line of scrimmage on both sides of the ball – the defensive line was pivotal in holding Florida back. The offensive line paved the way for running back Ty Isaac who finished the game 11 carries for 114 yards.

Michigan came out of halftime guns blazing, marching down the field to score on the first drive of the third quarter.

They quickly got the ball back after Gators Tyrie Cleveland fumbled on the kick return. Michigan tacked on two more field goals to extend their lead 26-17.

Wilton Speight started the game for the Wolverines and connected with Tarik Black for a 46-yard touchdown. His two throwing mishaps brought in John O’Korn entered in to replace Speight at quarterback after the two mishaps and stayed in for the remainder of the game.

In the 2016 Citrus Bowl Florida lost to Michigan 41-7. Although the defeat on Saturday wasn’t as severe, the upperclassman remaining from that team would have loved to gain some revenge.