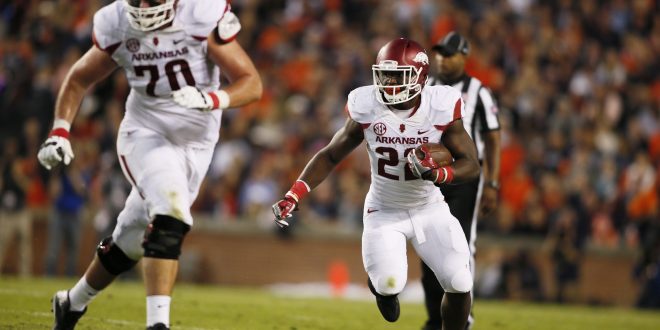 23rd-ranked TCU heads into Fayetteville, Arkansas this weekend for an SEC-Big 12 Showdown from Razorback Stadium.

Last season, TCU and Arkansas squared off in one of the year’s the most exciting college football games.  The Razorbacks pulled off the 41-38 road upset in double overtime over then-ranked No. 15 TCU.

Arkansas senior quarterback Austin Allen played a superb game against the Horned Frogs defense last year.  Allen went 17 for 29 with three touchdowns and no turnovers.  Allen will need to duplicate this performance at home if Arkansas wishes to pull off another upset against TCU.

Building off Week One

Both Arkansas and TCU are 1-0 after having warm-up games to begin 2017 the season.  The Razorbacks defeated Florida A&M 49-7, and TCU defeated Jackson State 63-0.

Razorbacks head coach Bret Bielema said the tune up game was good for Arkansas to see how some of the new players react to in-game situations.

These in-game situations are key to growing a cohesive football team.  There is no substitute for an in-game rep, even though transitions may go smoothly in practice. In reality, a coach never truly knows how everything is going to play out until gameday.

If there is one thing TCU is known for, it’s speed. They run a quick, no-huddle style of offense predicated on spreading out the defense, taking advantage of mismatches, and causing confusion in the secondary. Fortunately for Arkansas, they prepared for this offense just a year ago.  This recent experience against TCU’s up-tempo attack will be a major advantage for Arkansas headed into this weekend’s matchup. Lining up quickly and correctly is one aspect of the game Bret Bielema says his Razorbacks have been working on all week.

The biggest keys to this game for the Razorbacks will be the turnover battle, and ball control.  In last years win, Arkansas won both of these battles, helping them secure the victory over the Horned Frogs.

The Razorbacks need to give their defense as much rest as possible against the quick tempo of TCU. Arkansas is a very physical team that can run the football effectively. If Arkansas can pick up first downs on the ground and effectively chew clock, it should put them in prime position for another upset win over the Horned Frogs. This duty will fall heavily on freshman running back Chase Hayden, who had a huge debut for the Razorbacks last weekend.

You can catch coverage of this game on CBS.  Kickoff is set for 3:30.