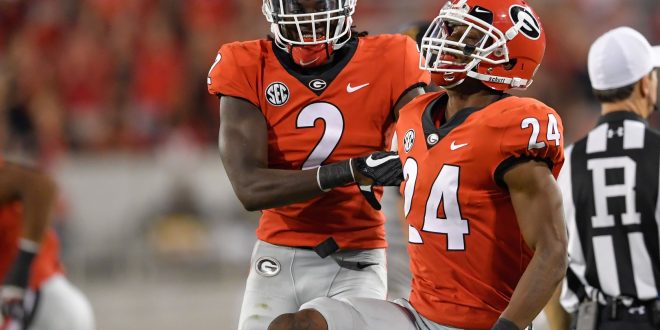 Notre Dame will have no problem extending their sellout streak to 257 this Saturday. For the second time in program history, the 24th-ranked Fighting Irish will take on the 15th-ranked Georgia Bulldogs.

Notre Dame hasn’t played an SEC school in the regular season since beating Tennessee in 2005. These two teams haven’t met since the 1981 Sugar Bowl, which the Bulldogs won 17-10 to complete an undefeated season and a national title.

On top of that, its only the 15th night game in Notre Dame’s stadium — ever. Georgia’s head coach Kirby Smart realizes the magnitude of this game.

Here’s what the two teams have to work with in this highly anticipated match up.

UGA opened up their season last week with a 31-10 victory over Appalachian State.

Georgia will have to conquer some adversity going into this Saturday’s game; their starting quarterback Jacob Eason went down in the first quarter against the Mountaineers. True freshman quarterback Jake Fromm will take over for Eason and make his first start in the red and black at Notre Dame.

Smart said Fromm is prepping for this starting role and is ready to take it on.

Fromm finished out the game strong for the Dawgs once Eason went down, leading three touchdown drives in the first half and completing 10 of 15 throws for 143 yards.

Fromm will have a pair of standout running backs to support him in his debut: Nick Chubb and Sony Michel. In the opener, Chubb and Michel combined for 183 yards and two touchdowns on 31 carries.

When it comes to trying to run a similar offense this week with Fromm, Smart said he knows they’ll be up against a high-tempo defense.

On the other side of the ball, Georgia has the experience to contain Notre Dame’s playmaking. Georgia’s defense has ten starters back from last season, who limited Appalachian State to 4.4 yards per play last week.

Notre Dame started out hot in their opener, jumping on a 14-0 lead less than 10 minutes into the game against Temple and carrying on to a 49-16 win.

The rush was outstanding across the field with three players, Josh Adams (161), Dexter Williams (124) and quarterback Brandon Wimbush (106), each recording over 100 yards.

Adams led the team last year with 933 rushing yards as a sophomore. As a freshman, he set a school record with 835 yards accompanied by a 7.1 average in 2015. Williams, a junior, gained his 124 yards on just six attempts against Temple.

The Fighting Irish also have a talented young quarterback in Wimbush, a sophomore, who made his first collegiate start last week. He recorded 17 of 30 throws for 184 yards and two touchdowns.

Notre Dame also boasts one of the best offensive lines in the country, with senior guard Quenton Delson and graduate student Mike McGlinchey, both AP Second Team All-Americans for 2016.