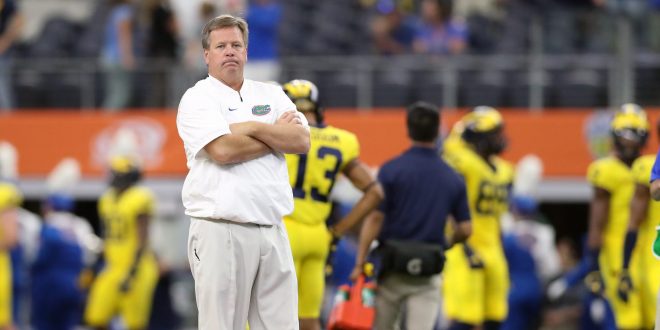 At Wednesday’s press conference, a somber Florida head coach Jim McElwain talked at length about the effects of Hurricane Irma, before turning his attention to this weekend’s upcoming rivalry game against Tennessee.

It was apparent the storm had a big effect on McElwain, as he spoke emotionally for much of the press conference. He said that with the storm that passed this past weekend, “there is no normal” to return to.

McElwain said that around 60 players were affected in some way by the storm and while it’s nice to get back to football this weekend, having a storm like Irma pass by puts the game in perspective.

To that effect, UF has announced that they will be recognizing those impacted by Hurricane Irma on Saturday. They’ll be wearing special Florida decals on the back of their helmets.

The hope, McElwain said, is that by playing the game, the team can give Floridians a diversion and something to take their minds off of Irma. McElwain also said he’s looking for extra energy from his team for this occasion.

The Gators now are turning their attention past Irma and on to Tennessee.

On top of the emotions from this past weekend, Florida also comes in with plenty of motivation.

That’s why McElwain said Wednesday that “it’s time to pick back up and get going.”

That starts on the practice field. Considering the late start to the week, McElwain and his staff are approaching it in a way he used in his time at Louisville. One season, he said they ended playing at least once on every night of the season. The way they handled it was by switching to a color system instead of going by days of the week.

“We’ve kind of approached this the way you would a Thursday or Friday game, and put the things in that way,” he said.

Specifically for this game, he talked about the secondary and the offensive line.

In terms of the secondary, he said he’ll be looking for them to win their 1-on-1 matchups. Michigan’s wideouts won a few of those battles last week for chunk gains. That includes a Tarik Black 46-yard touchdown for Michigan’s first of the game.

On the offensive line, he talked about how pride comes into play as they also look to bounce back against another stout defensive line in Tennessee’s.

An improved performance from them would go a long way in making life easier for Feleipe Franks. The redshirt-freshman will be making his second start of the season, McElwain confirmed.

One other thing of note is that McElwain said offensive coordinator Doug Nussmeier will be moving up to the press box this week to call plays. This will be the first time he’s done that since 2015. This comes on the heels of many questioning whether McElwain would take over play-calling duties from Nussmeier.

Florida kicks off against Tennessee at 3:30 p.m. on Saturday.