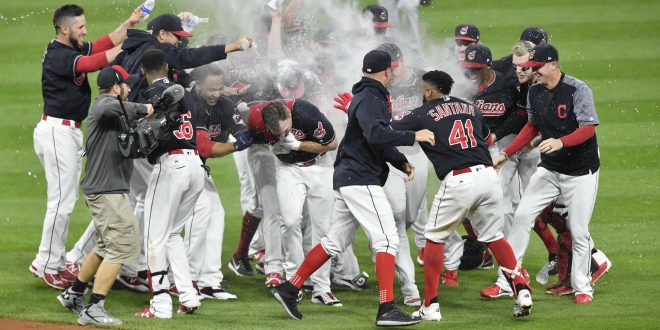 It was a close call on Thursday night for the Cleveland Indians as their historic streak was in jeopardy.

However, the Tribe secured their 22nd consecutive win with the help of a bottom of the 9th off-the-wall double to tie the game and a 10th inning walk-off to beat the Kansas City Royals 3-2.

Thursday night marked the beginning of a 4-game home series as the Indians host the Royals through Sunday. Josh Tomlin (9-9) took the mound for the Indians and Jakob Junis (7-2) was the starting pitcher for the Royals.

In the top of the second, Mike Moustakas grounded into a double play, which drove in Eric Hosmer and put the Royals on the board 1-0. Except it didn’t take the Indians long to catch up and tie the game. In the bottom of the third, Lonnie Chisenhall singled on a line drive to right field driving in Abraham Almonte.

The game remained tied for the next few innings until Hosmer doubled on a fly ball to left center field in the top of the 6th. Melky Cabrera scored and the Royals took the lead.

Heading into the bottom of the 9th, the Indians were down by one. The Royals had put up a great fight against the Indians and with only one out left, the streak was at risk.

That’s when Indians’ shortstop Francisco Lindor approached the plate. It was the bottom of the 9th, 2 outs and a 2-2 count when Lindor swung his bat and sent the ball to the left field wall for a game-tying RBI double.

Heading to extra innings, the hope of keeping their historic streak alive continued…

However, in the bottom of the 10th when Indians’ outfielder Jay Bruce came up to bat, the hope of continuing The Streak became a reality when Bruce cranked a ball to right field for a walk-off to end the game. José Ramírez scored to make the final score 3-2.

As Bruce rounded the bases he was met by his teammates and the celebration began. On the field, water and baby powder were flying everywhere while the Indians rallied around Bruce. So what does it feel like to win 22 consecutive games? According to Bruce, it means everything.

After the game, and after most of the on-field celebrations ceased, Bruce commented how he wanted a chance to pick his teammates up and had that opportunity in the 10th to do just that.

Looking Ahead: Playoffs and The Streak

As if making history this week wasn’t enough excitement for the Indians, there is more exciting news for what’s ahead.

A few hours after the Indians won on Thursday night it was learned that they clinched a playoff spot in the 2017 postseason since the Los Angeles Angels lost to the Houston Astros 5-2.

The Indians will try for number 23 tonight as they face the Royals again at 7:10 p.m. 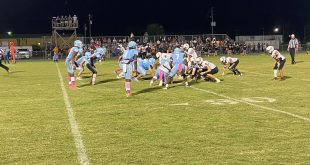