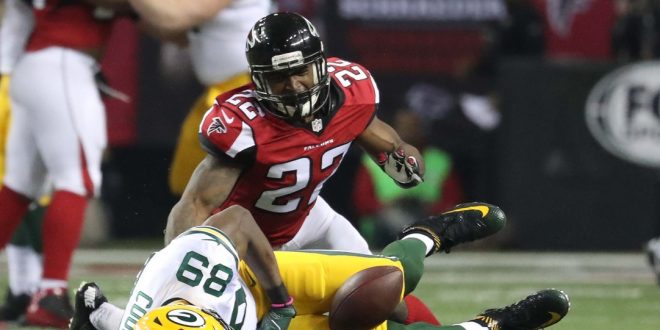 The National Football League has some key matchups during Week 2 including a rematch of last year’s NFC Championship game. This Sunday includes an action packed schedule with clashes between successful teams in their season openers. Therefore, you should probably tune in (especially if your Fantasy Football team has anything to say about it).

In the Georgia Dome finale last season, Matt Ryan silenced all his critics and lived up to the ‘Matty Ice’ nickname he is known by. Although Aaron Rodgers is arguably the best quarterback in the league, the spotlight ultimately shined on Ryan and his Atlanta Falcons. Overall, the Falcons took advantage of the Packers injuries with heroics from Julio Jones and a great defensive performance.

The Falcons came into Week 1 with a down to the wire win against the Chicago Bears. On the other hand, the Green Bay Packers took care of business at Lambeau Field against the Seattle Seahawks.

Atlanta allowed the Bears to remain close because of missed tackles, according to head coach Dan Quinn. The Bears made it all the way to the five yard line before quarterback Mike Glennon was sacked on fourth down. Otherwise, the Matt Ryan-Austin Hooper combo made the difference on offense with over 100 yards and a touchdown.

Aaron Rodgers did not have a bad game against a strong Seahawks defense, but it certainly was not his best. A frustrating first half including a pick was eventually silenced by a touchdown to Jordy Nelson.

All in all, teams with great offenses are looking to unlock their scoring potential while the Falcons defense want to be as dominant as the Packers defense were Week 1.

Will the game be a high scoring thriller with amazing catches all over again? Who knows, but it will grab all the headlines.

Both the Philadelphia Eagles and Kansas City Chiefs are extremely satisfied with their season openers and it is hard to argue why.

The Eagles get a division win on the road against the Washington Redskins after they both finished at the bottom of the NFC East last season. With both teams still trying to determine if they have their franchise quarterback, Philadelphia’s Carson Wentz edged out Kirk Cousins with two touchdowns.

Former Florida Gator Caleb Sturgis had a perfect day by making all three of his field goals (Long 50). The Eagles defense had one interception and four sacks to wrap up a 30-17 win. Sturgis, however, was placed on the injured reserve list after suffering a hip injury on Sunday. Jake Elliot will assume his kicking duties for the Eagles.

The Chiefs could have arguably had the most relevant win in football last week. Quarterback Alex Smith and his offense had 537 total yards against the reigning Super Bowl champion New England Patriots. Both Kareem Hunt and Tyreek Hill had over 130 yards which totaled 75 percent of the Patriots offense. Tom Brady was left without a touchdown in Week 1.

If the Chiefs win was not big enough for you, then you have to at least give a round of applause to Alex Smith for actually throwing a football deep!

If Philadelphia does not miss former and now head coach of the Chiefs Andy Reid, they might this weekend.

Sam Bradford dominated on Monday Night Football, and took home Player of the Week honors because of it. pic.twitter.com/oiu65dSXS3

If you love watching fun football games, then you probably want to catch an exciting Vikings-Steelers game.

The Adrian Peterson-less Vikings started a new era with Dalvin Cook at running back and Sam Bradford still in for the injured Teddy Bridgewater. Sam Bradford was nearly perfect against a poor New Orleans Saints defense by completing 84 percent of his passes. Adam Thielen and Stefon Diggs combined for 250 receiving yards in a 29-19 win.

However, a source told ESPN that the Vikings are concerned about quarterback Sam Bradford’s knee going into this weekend. Injury problems at quarterback is the last thing the Vikings want to have. Although Dalvin Cook had 127 rushing yards, he can’t be expected to repeat those numbers against a better Steelers defense.

Pittsburgh had a close game against a Cleveland Browns team that appears to be improving. A running game including Le’Veon Bell was almost nonexistent, which made the game the Antonio Brown show. Brown had 11 catches for 182 yards in just one game to re-cement his status as a top receiver. A pick by rookie T.J. Watt and seven sacks against the Browns made the difference since the Deshone Kizer-led offense had no player finish with a big game.

Just like the Packers-Falcons matchup, this is a game NFL fans will likely be watching.