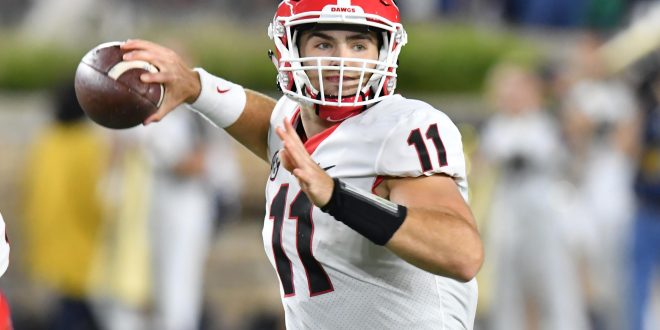 It’s the battle of the Bulldogs tomorrow as Georgia takes on Samford in Athens. The #13 Dawgs enter week 3 with two wins under their belt and a freshman quarterback who is continuing to build his confidence on the field.

Georgia and Samford have met once before in 1943, which ended in Georgia winning 39-0 in Athens. But that’s not the only connection the two teams have. Samford Head Coach Chris Hatcher gave coach Kirby Smart his first coaching job at Valdosta State in 2000. Smart was an assistant coach to Hatcher.

But the former co-workers will have to put their friendship aside for a few hours on Saturday.

Here’s what each Bulldog team is bringing to the Sanford Stadium this weekend.

Georgia will want to get a win from this game as it will keep them undefeated heading into SEC play. Georgia Head Coach Kirby Smart says Samford’s play style is different than what they are used to.

Georgia QB Jake Fromm mad an impact last week in the game against Notre Dame. He passed for 141 yards and had one touchdown. Smart says his confidence is definitely boosted going into this game.

Fromm will have to play the position smart in order to go up against the Samford defense. Smart says his expectation of him has stayed the same week to week: to play “winning football.”

The Bulldogs had a 7-5 season last year and Head Coach Chris Hatcher’s second year in charge. One of their losses was against SEC team, Mississippi State, where they went down 56-41. In the FCS playoff last year, Samford lost in the first round.

However, the team has 12 starters who are returning. One of them is QB Delvin Hodges, who had an impressive completion percentage of over 70% last year and threw for 36 touchdowns.

A win for Samford would mean a 3-0 record and a win against a ranked SEC team.

The Georgia vs. Samford game will kickoff at 7:30 pm in Sanford Stadium. You can watch it on SEC Network Alternate.