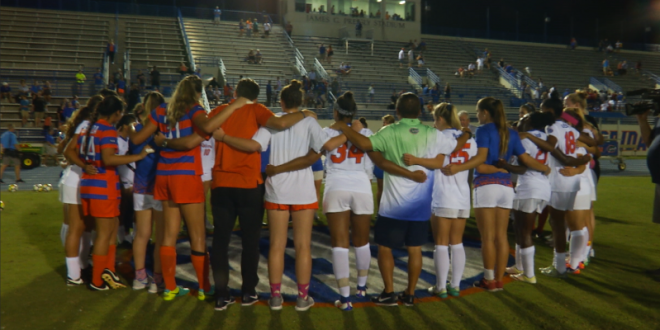 After a week off due to Hurricane Irma, the Florida soccer team got back into action Thursday night at home and came away with a 1-0 win over the Ole Miss Rebels.  The win opens the SEC season for the Gators as well as Florida improves to 6-1-1 on the season.

The Gators had the early lead thanks to Mayra Pelayo who made a tap-in that ended up on the right corner of the net. The play started from a throw-in on the left wing; Melanie Monteagudo received the ball, held it for a moment, beat Lazi Harbin by turning her body and then sent the cross to assist Pelayo.

Thanks to the early lead, the Gators had the chance to control the possession of the ball and the pace of the game. It was a slow-paced game because of the way the Gators used their 3-5-2 formation. The most essential pieces of that scheme were Briana Solis and Parker Roberts. Defensively both players had a great positional sense every time they had to cover the empty spaces left by Kristen Cardano and Rachelle Smith. Cardano and Smith provided more depth on offense every time they drove the ball up front to give assistance to the forwards.

But the most important factor in the game was Roberts and Solis using their playmaking vision to take advantage of the passing lanes created by Pelayo, Monteagudo, Lais Araujo and Deanne Rose.

“I mean, I think when we play the 3-5-2 is a little different than the 4-2-3-1 for us,” Florida coach Becky Burleigh said. “So obviously it’s less center players there. But I thought we were able to exploit the width at times. We didn’t get quite as much production out of the width players, but we were able to find them.”

Unfortunately for the Gators, just one of the 10 created shots got into the net.

The next game for the Gators will be on the road against Iowa State Cyclones on Sunday.

Journalism student at the University of Florida. Venezuelan and future sports journalist.
@joseso2793
Previous Gators Volleyball Back in Action after Hurricane Irma
Next Cincinnati Bengals Fall to the Houston Texans