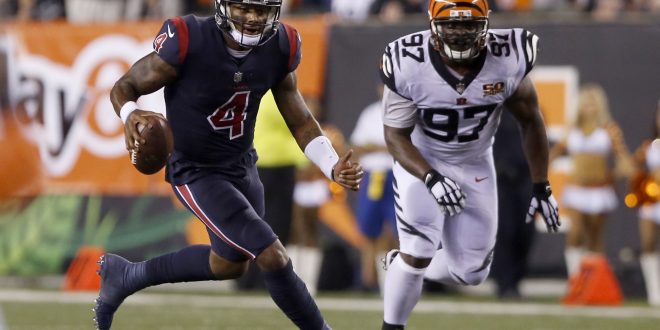 With week 2 of the NFL Underway, the Cincinnati Bengals fell to the Houston Texas with a final score of 13 to 9. This was the first win of the official NFL season for the Texans.

Former Clemson quarterback Deshaun Watson made his first start on his 22nd birthday. He showed his athleticism while dominating the Texans’ offense by running 49 yards for a touchdown in the first half. “Being able to have my first start on my birthday it was emotional. It was a good opportunity for me to show what I got, and what I can do for this team. It was a hard fought win, and we knew they were going to test us” Watson said.

The young QB led an offense that was missing three tight ends, wide receiver Will Fuller V, and guard Jeff Allen as well. The Texans received tough pressure from Cincinnati yet kept it simple.

"You ignored the noise. You went to work and you got the win."

He went 15 of 24 for 125 yards. He also had no interceptions against the Bengals.

Bengals still looking for it

The Bengals haven’t scored a touchdown in their last two games. Both of these teams don’t really have explosive offenses so it was up to the defense, especially for the Texans.

Bengals quarterback Andy Dalton fell 1-6 against the Texans on Thursday night. The Bengals only managed to get on the board by field goals, thanks to kicker Randy Bullock.

The Bengals were close to a touchdown when tight end Tyler Eifert caught a pass from Dalton in the endzone in the third quarter, but Eifert stepped out of bounds before making the catch, therefore it didn’t count.

A.J. Green speaks to the media in the locker room after #HOUvsCIN pic.twitter.com/wKu7g8S3ia

“This isn’t the way we know we can play, we haven’t hit our stride yet, we’re disappointed” Dalton said.

Up next for the Bengals will be a trip to Green Bay to take on the Packers. For the Texans, they will travel to New England to take on the Patriots. Both teams will play on Sunday September 24th.