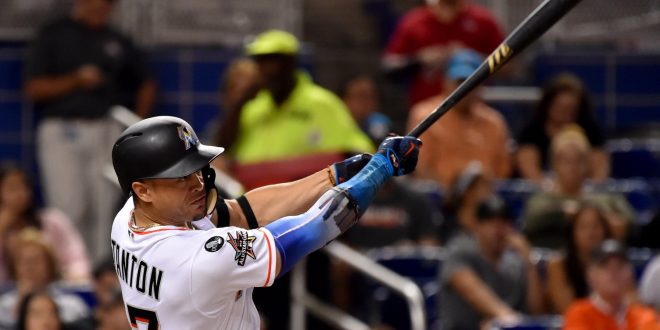 MLB Home Run Record On Cusp of Being Broken

Major League Baseball’s home run record for homers in a season could very well be broken this season.

Thanks in part to a few sluggers, namely New York Yankee rookie Aaron Judge and Miami Marlins powerhouse Giancarlo Stanton, 2017 is the year of the home run. The total for home runs this season is at an enormous 5,677 through Sunday’s action. The record, which was set in 2000, is only 17 home runs away from becoming obsolete.

One of the biggest stories coming out of this season is that of Stanton’s home run supremacy. The 27-year-old right fielder would restart the talks of hitting 60 runs on the season after netting home run number 55 against the New York Mets on Monday in Miami.

Before that homer, Stanton had been slumping; he went 7-for-40 and had only one home run in his last 11 appearances. Stanton also had only three home runs in September before entering Monday’s tilt with the Mets. With his latest homer clocking in at 114 mph and leaving the park in 4.5 seconds at 455 feet, the dream of 60 once again became very possible, while keeping Stanton on top of the National League in the home run category.

Stanton now has three scenarios with 12 games left in the season. He has to hit five homers to reach 60, six to tie Roger Maris’ 61 and seven to hit 62 and put himself with elite company. Only three players have gone past that mark; Barry Bonds, Sammy Sosa and Mark McGwire. Stanton looks to not only add to his legend in a battle against the Mets at home, but also looks to add on to the all-time home run record.

One other player featured in the home run talk is Yankees’ right fielder Aaron Judge. Judge also scored a big “Judgian blast” home run in a 2-1 home victory over the Minnesota Twins.

Aaron Judge puts the @Yankees up 1-0 in the 1st with his 44th HR! #AllRise #MLBNShowcase pic.twitter.com/sDz99mmqEm

Judge’s homer last night brings his season total to 44 and he continues to lead the American League in total runs. Judge now also inches closer to a little bit of history of his own; his 44th homer last night now puts him five away from tying Mark McGwire for the most by a rookie in a season, according to ESPN Stats & Info.

Aaron Judge: 44th HR of the season, 5 away from tying Mark McGwire (49) for the most HR by a rookie in a season

Judge and the Yankees look to keep the streak going and be a part of history as they continue their series against the Minnesota Twins. More than a shot at being a part of a historic evening, they also look to continue their chase toward a wild-card position heading into October. Judge is looking to help the Yankees in the playoff hunt while traveling the road to history and breaking McGwire’s rookie home run record.

Does the Record Crumble?

With the MLB home run record on the cusp of being broken, tonight is a big night in baseball. Some of the featured games include the Miami Marlins once again hosting the New York Mets and the Tampa Bay Rays hosting the defending World Series champion Chicago Cubs. For up to date coverage on the record and tonight’s action, stick with ESPN Gainesville for more.