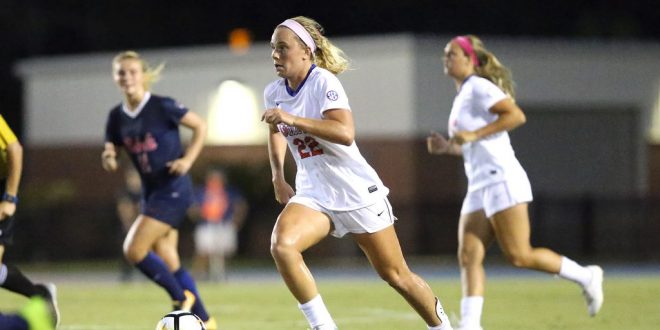 The No. 6 Florida Gator soccer team and the Texas A&M Aggies meet once again almost two years after the Gators got a 2-1 victory over the Aggies in their last regular-season game.

Florida arrives in College Station with the mission of not only expanding its winning streak to four games, but especially improving its efficiency on offense; the Gators have won six of their eight games played this season by just one goal.

In their last game on Sunday, the Gators beat the Iowa State Cyclones 2-1 in overtime thanks to two goals scored by Deanne Rose. This game let Rose end up with a five-game goalless stretch. The Gators created multiple chances against the Cyclones but only could complete two chances. Something that will take time for them to keep working on and improving it; especially knowing that they are in their post-Jordan phase.

Defensively, the Gators have shown solidity on their positional organization. They have used multiple game schemes like the 3-5-2 or 4-2-3-1 to deploy their offensive game plan while keeping rivals away from their net. Both schemes let the Gators emphasize on the inside-to-outside paths. Parker Roberts and Briana Solis are the main orchestrators who constantly take advantage of the passing lanes created by the wingers and wing-backs. The defensive balance that both center midfielders provide is helpful for the defensive back to advance lines and get involved on offense. Florida has only allowed five goals in their eight games played.

The Aggies currently have a 4-2-1 record. They are looking to try to replicate against Florida what they did against the other two ranked teams that they have faced so far, this season. Texas A&M tied 2-2 against the OSU Cowgirls and beat the Kansas Jayhawks 5-1.