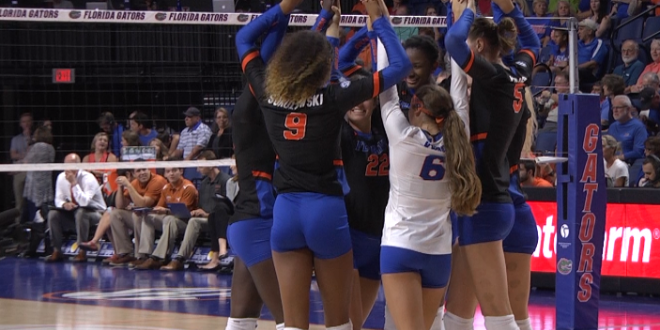 The Florida Gator Volleyball team warming up before taking on No. 1 Texas. Photo by: Haleigh Singer

After dominating their non-conference opponents to begin the season, the third ranked Florida volleyball team travels to Arkansas for their SEC opener on Sunday afternoon.

Gators on a roll

The Gators are fresh off their fourth win against a ranked opponent this season as they swept the Florida State Seminoles in three sets earlier this week. Florida is coming into the SEC opener with an 8-0 record.  Gator coach Mary Wise is coming into the game with 883 career wins. With the win against Florida State, Wise passed UC Santa Barbara head coach Kathy Gregory for the ninth most career wins in NCAA Division I history.

The Gators are putting an emphasis on defense as they held the Noles to a .110 hitting percentage. Florida also recorded 10 blocks in their last match.

Florida will be playing a Razorbacks team that is 11-2 headed into the match. Arkansas already has a SEC win under its belt as they swept the Tennessee Volunteers on Wednesday night.

Arkansas has only beaten Florida three times, the last time coming in the 1997 SEC Championship match. It won’t be a walk in the park for the Gators as Arkansas is 5-0 at home this season.

This weekend’s match is the first of two against Arkansas, the next one coming on November 10th in Gainesville. The last time the Gators arrived in Fayetteville this highly ranked was 2013 when they were ranked second in the nation.

A player to watch for Arkansas is Pilar Victoria. Victoria had a team-high 17 kills in the Razorbacks victory over the Volunteers.

The match between the Razorbacks and the Gators will not be televised but it will be broadcast live on ESPN Gainesville 98.1 FM / 850 AM.