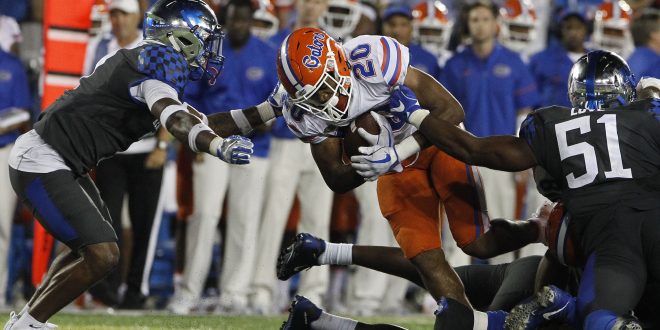 For the second straight week, the Florida football team takes advantage of an opponent’s defensive gaffe.

For the second straight week, the Gator football team pulled out a last-minute victory.

And for the 31st straight year, the Gators came out with a win against the Kentucky Wildcats.

In this latest installment in Lexington, Florida pulled out the 28-27 win after a five-yard touchdown pass from Luke Del Rio to Freddie Swain put them up with 43 seconds left. It quite possibly may be one of the easiest touchdowns Del Rio will ever make, as the Kentucky defense failed to cover Swain.

For the first time tonight … FLORIDA TAKES THE LEAD IN LEXINGTON!@GatorsFB 28-27 | :43 left in the game pic.twitter.com/XIlhLgTdue

Del Rio said that the call was an originally a run play, but that he got it to Swain after he gave him “a wide-eyed look.”

The Wildcats had a chance to win it in the end but Kentucky kicker Austin MacGinnis missed a 57-yard field goal as time expired.   Kentucky had moved the ball to the Gator 20 but a holding call pushed the Wildcats back.   A sideline pass got the Wildcats close but it ended up just outside the range of MacGinnis and the Gators held on for the win.  Florida is now 2-1 and 2-0 in the SEC East. Kentucky meanwhile falls to 3-1 and 1-1 in the East.

Luke Del Rio ended the game for Florida, but Feleipe Franks started it at quarterback. Franks didn’t do much wrong (7-for-12, 85 and 1 TD), but the offense seemed stagnant with him at the helm. The game went into halftime tied at 14-14, but with Kentucky looking like the bigger offensive threat.

Kentucky quarterback Stephen Johnson had a big game and it started early. The Wildcats went up 7-0 on their second drive, with Johnson hitting Blake Bone from 14 yards out. Florida answered via their “human joystick” in Kadarius Toney. Toney took a snap in the wildcat formation and took it to the house from 36 yards out.

Toney was more involved in this game, providing explosive plays and injecting life into Florida’s offense. He finished with 64 yards on six touches. He also had a big 50-yard pass to Tyrie Cleveland to help jump-start one of the fourth quarter scoring drives.

Franks connected with Cleveland on a touchdown for a second straight week to tie things up at 14-14. In a move that would cost them again down the stretch, Kentucky failed to cover a wide open Gator receiver. On a fourth-and-three halfway through the second quarter, Franks found Cleveland, and the sophomore did the rest, scoring a 45-yard touchdown.  Cleveland led all Florida receivers with four catches for 110 yards and the score.

Florida started the second half slowly, and it eventually led to the change at quarterback. They went three-and-out on their first possession of the third quarter, and Kentucky punished them for it. Stephen Johnson hit CJ Conrad for his third touchdown pass of the game.

Kentucky had success picking up yardage at will at times against the Florida defense. Johnson threw for 220 yards and Benny Snell added 59 on the ground as the Gators struggled to wrap and tackle yet again, a recurring issue Florida must address as it goes forward in its SEC schedule.

After the Wildcats tacked on a field goal to go up 24-14, Del Rio came into the game. Florida head coach Jim McElwain said, “It felt like an opportunity for a jump start.” Del Rio threw a pick on his first drive to defensive back Darius West, and things looked dire for Florida. Kentucky turned that turnover into another three points to go up 27-14.

The Gators would not quit, however.  In the fourth quarter, they started to lean on the run game and it made the difference. While Kentucky came in with the top rush defense in the SEC (57 rush yards allowed per game), attacking that strength was where Florida had success to the tune of 186 yards.

The effort was led by freshman Malik Davis, who had a breakout game; he carried 21 times for 93 yards and showed some power up the middle to go with his elusiveness. Florida head coach Jim McElwain said it’s good to see the offense doesn’t need to throw the ball every down, and can rely on the run game to pick up five and six-yard chunks. Midway through the fourth, Toney’s 50-yard pass to Cleveland sparked the Florida comeback. From there, Davis ran four straight times, moving Florida to the Kentucky six yard line. Brandon Powell, who also came up huge in the fourth, ran it in from there to make it 27-21.

The Gator defense then made the stop it needed.  The Florida defensive line was the big bright spot for the defensive and it came through in the fourth. Taven Bryan, Jachai Polite, Jabari Zuniga and Cece Jefferson were constantly in the backfield, and the unit racked up four sacks. A sack from Bryan and David Reese killed Kentucky’s next-to-last drive and gave Florida a chance to take the lead late.

And they did. The drive saw a heavy dosage of Davis again, but Del Rio made some veteran plays. On a fourth and three at the UK 40, he rolled out to his right, bought time, and threw across his body to an open Mark Thompson to keep the drive alive. Perhaps his biggest play was on third down at the UK 5. Kentucky had a substitution mix-up, leaving Swain uncovered. Del Rio saw him, checked out of the run play, and put the Gators on top for good.

So how do the Gators feel after making it not just 31 in a row against Kentucky, but also back to back nail-biting wins over division rivals?

“I think it helps bond us together,” Taven Bryan said. “We all get together, we all have a good time, and it really helps fortify and strengthen our team.”