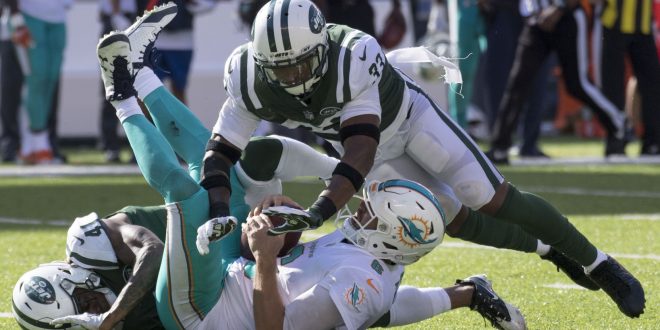 The New York Jets handed the Miami Dolphins their first loss of the season in dominating fashion on Sunday 20-6.

As soon as the Dolphins took the field on Sunday, things went downhill. Miami simply looked lifeless. The offense punted on their first seven possessions and didn’t score until their last drive. The Dolphins had two turnovers, four three-and-outs, 30 total rushing yards, and went 1 of 12 on third downs. Quarterback Jay Cutler struggled to find open receivers, and when he did, his receivers dropped the ball far too often. Star running back Jay Ajayi had just 16 yards on 11 carries, and Jarvis Landry caught just 6 of his 11 targets for 48 yards. The offense found almost no success and barely avoided a shutout with a touchdown on the last play of the game. After the game, Jay Cutler said that this game is a “wake-up call” and that the Dolphins have to prepare better going forward.

Here is one of the Dolphins’ two interceptions:

Not so fast. @_Showtime29 with the pick on the Dolphins' fake punt! #MIAvsNYJ pic.twitter.com/IO8adDmMbZ

The Miami defense played almost as poorly as their offense and made the New York offense look good. The Jets offense was on the field for 36 minutes and averaged 5.7 yards per play. Jets quarterback Josh McCown completed 18 of 23 passes for 249 yards and a touchdown. McCown made timely passes, including a 69 yard touchdown pass to Robby Anderson in the second quarter. He hit open receivers and kept the Jets offense running smoothly against the lackluster Dolphins defense. The Miami defense left receivers open, missed tackles, and was a step slow on far too many plays. Dolphins head coach Adam Gase had this post-game comment about the way his team played on Sunday:

The Dolphins lost in embarrassing fashion to a Jets team that is not expected to have much success this season. They sit at 1-1 on the season and must now focus their attention on playing against the Saints next week in London. Playing against a poor Saints defense may help the Miami offense get in a groove, but the defense will have to improve against Saints’ QB Drew Brees. The Dolphins showed last season that they are a resilient team under Adam Gase, so don’t count them out just yet.