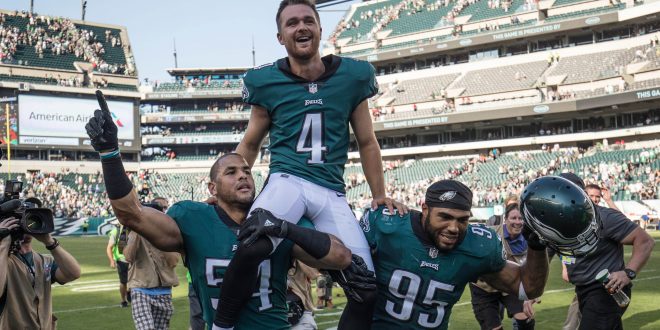 Exciting Finishes Around the NFL in Week 3

Week 3 in the NFL brought some exciting finishes and big upsets around the league.

The Chicago Bears upset the Pittsburgh Steelers in overtime Sunday at Soldier Field. The Bears forced some turnovers in the first half and had the potential to keep the momentum going into halftime. However, a mistake by cornerback Marcus Cooper would prove costly. Cooper recovered a blocked field-goal attempt and ran it back to the 1-yard line. The issue was that he slowed down near the end zone. Steelers tight end Vance McDonald tackled Cooper, forcing a fumble. Officials ruled that Pittsburgh intentionally knocked the ball out, and the Bears would end up with a field goal going into halftime. The Steelers would end up tying the game with a field goal and taking the game into overtime. Jordan Howard’s 19-yard touchdown for the Bears gave the Chicago a 23-17 win.

Howard was excited about scoring the winning touchdown.

The Carolina Panthers were 2-0 heading into week 3, while the New Orleans Saints were looking for their first win. New Orleans quarterback Drew Brees threw for 220 yards and 3 touchdowns, leading the Saints to a 34-13 upset over the Panthers. The Saints defense, which was ranked worst in the NFL, sacked Cam Newton four times and intercepted him three times. Running back Christian McCaffrey was the bright spot for the Panthers offense with 101 yards and nine catches. Newton was pulled in the fourth quarter, going 17 for 26 with three picks.

Newton knows the Panthers will need to step it up before next week’s game against the Patriots.

The New York Giants have fallen to 0-3 on the season after Sunday’s loss to the Philadelphia Eagles. The Giants made too many mistakes, including multiple costly penalties. One of those penalties was the result of an Odell Beckham Jr. touchdown celebration.

Beckham Jr. addressed his celebrations after the game, saying he would do whatever he could to spark the team.

Two penalties came in the last minute of the game; an illegal shift moved New York back 5 yards and a holding call resulted in another loss of yards. The game ended in an exciting fashion for the Eagles. 22-year-old rookie kicker Jake Elliott kicked a 61-yard field goal to put a W in Philadelphia’s win column.

The Dallas Cowboys and the Arizona Cardinals will face off in tonight’s Monday Night Football matchup.

Born and raised at the ballpark! Typically quiet- until it comes to sports. I'm a South Florida native with a passion for baseball nearly as strong as my faith. Grew up in garnet + gold, turned out sporting orange + blue. Likely to be found with a camera. And yes, I take food pictures.
@victoriarossman
Previous NFL Preview: Cowboys Face Cardinals in a Monday Night Clash
Next Press Conference: Coach Jim McElwain Addresses Starting QB