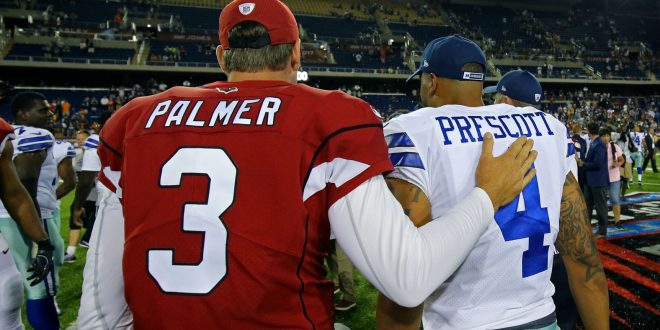 The Cowboys head to Arizona to face off against the Cardinals in a Monday Night Football battle of the deserts. But after a rough start to the season for both teams, the desert may be looking drier than ever.

Cowboys Struggle Early in the Season

The Cowboys are currently even in the win and loss column with one apiece. The first win came from a less than mediocre Giants team beating them 16-3. The Giants have gained a reputation as the worst team in the NFL, which shows that the win was expected.

However, the loss they received was difficult to watch. The Broncos absolutely demolished the Cowboys 42-17 last weekend in the Mile High City.

Second-year stud Ezekiel Elliot had a rough time with the Broncos defensive front. He finished with 9 carries for 8 yards, both career lows after averaging 108.7 yards per game last season. On the other hand, Dak Prescott tried his best to keep the offense rolling, finishing with a career-high 50 passing attempts for 238 yards and two touchdowns. Not to mention, Prescott was the leading Cowboys rusher with 24 yards.

Unfortunately, the Broncos defense was too much for Prescott to handle as they picked him off twice, with one of the INT returned for a 103-yard touchdown.

So far, the Cowboys go-to receiver is tight end Jason Witten with 17 receptions for 156 yards in two games. Dez Bryant trails with nine receptions for 102 yards. Furthermore, all eyes will be on Elliot after underperforming last week.  Cowboys fans can hope for a better performance, but the Cardinals only allowing 79 rushing yards through two games makes their hopes slightly more dismissive as Elliot could have another rugged night.

Many expected this to be the game of the season. Superstars Prescott and Elliot coming off a fantastic rookie year against consistent veterans Carson Palmer and Larry Fitzgerald with a running back sensation David Johnson.

Unfortunately, Johnson is out with a wrist injury and possibly out for eight weeks or more. The Cards barely beat the Andrew Luck-less Colts in OT. Larry Fitzgerald hasn’t really made an impact in both games thus far. And last but not least, Palmer looks like he’s got the spotlight on him and he hasn’t seemed like himself these past games.

Dallas’ secondary is inexperienced and just came off their worst performance of the season. The Cardinals threw for just over 300 yards against the same type of caliber defense in Indy this past weekend. In conclusion, if the Cardinals can put up the same type of numbers against the Cowboys young secondary, then they’d most likely have the advantage and dominate playing time.

Therefore, if the Cardinals dominate the playing time, that leaves Tyrann Mathieu and Patrick Peterson, two of the leagues best cornerbacks, out on the field with full energy. Look for both of these cornerbacks to make it a tough day for Dak Prescott.

Recent grad from the University of Florida. Editing all articles on here while helping out the newbies. Love all things basketball.
@@MarcoJMartinez_
Previous Jaguars Rout Ravens in London
Next Exciting Finishes Around the NFL in Week 3