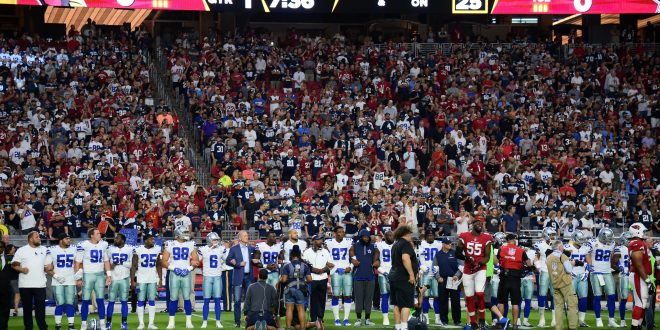 President Trump made headlines when he suggested that players who do not stand for the National Anthem be fired, using the phrase “son of a b****.” This sparked outrage especially among NFL employees such as players, coaches and owners. In response, teams throughout the league protested during the Anthem in a show of unity.

The Cowboys team & ownership demonstrated a show of team unity before the playing of the national anthem at #DALvsAZhttps://t.co/j3P6ErKAxR pic.twitter.com/yCwZdMCZcQ

Cowboys and Cardinals conclude protests with display of unity

The Dallas Cowboys and the Arizona Cardinals were the last two teams to protest during the National Anthem. The Cowboys took a unique approach. Before the Anthem played, the team kneeled with arms locked. Among those participating was Cowboys owner Jerry Jones, who has supported Trump before. Of all the people who protested, Jones was perhaps the most surprising participant.

“I do not think the place to express yourself in society is as we recognize the American flag and all the people that have made this great country – the very opportunity for us to be there in front of the nation,” Jones had said on Fox Business’ “Mornings with Maria.”

The team then stood up as the National Anthem played. Cowboys quarterback made a statement about the team showing unity. The Cardinals, meanwhile, gathered at the goal line with arms locked. Among those who participated included Michael Bidwell, his family and general manager Steve Keim. Boos could be heard across University of Phoenix Stadium.

Former American Idol winner Jordin Sparks sung the National Anthem during the Cowboys-Cardinals game. She had Proverbs 31: 8-9 written on her hand. The Bible verses read: “Speak up for those who cannot speak for themselves, for the rights of all who are destitute. Speak up and judge fairly; defend the rights of the poor and needy.”

In addition to players from the Cowboys and Cardinals, those who participated included Aaron Rodgers, Terrell Suggs, Mark Ingram, Alvin Kamara and Laremy Tunsil.

Previous NBA Preview: Cavaliers and Celtics Looking to Make Most Out of Trade
Next Dallas Cowboys Get a 28-17 Victory Over The Arizona Cardinals On MNF