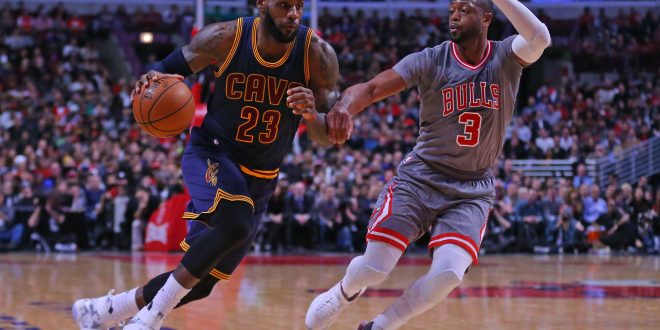 Dwyane Wade and LeBron James Reunite for Another Championship Run

NBA superstars Dwyane Wade and LeBron James are reuniting on the Cleveland Cavaliers to aim for another NBA Championship. Wade recently agreed to a buyout with the Chicago Bulls after one season where he left about $8 million of his $23.8 million salary on the table. Reports across the media said Wade favored the Cavs, joining the San Antonio Spurs or returning to the Miami Heat. After arguably the most dramatic offseason in history, Wade will compete again to win another ring versus a stronger Western Conference.

The two future Hall of Famers joined forces with Chris Bosh to form one of the most dominate super teams of all-time seven years ago. Despite being leaders of their previous teams, Wade valued teamwork in order to conquer the NBA for four seasons in South Beach. The Miami Heat’s four straight trips to the NBA Finals resulted in two championships that helped cement their legacies. Wade and James’s relationship became a highlight tape, with their exchanges on the court going viral everywhere. Wade ended up with the same amount of rings as his jersey number and remains a legend in Miami.

However, James decided to pursue another run with his hometown Cavs. Wade and Bosh were to carry the load by adapting to play with a whole new set of players around them. Unfortunately, Bosh’s career ended after being diagnosed with blood clots in his lungs, which prevent him form playing, after receiving a max contract from Miami. Wade, who was left to play with veteran Goran Dragic and newcomer Hassan Whiteside, needed a change of scenery.

Wade signed a two-year deal worth about $47 million for the Chicago Bulls before last season. Nonetheless, although it was his dream to play for the team he grew up with, they were not title contenders. The shooting guard only managed to play nearly 30 minutes a game for 60 games, averaging 18 points on a bad team. In the meantime, James went to three straight championships in that span of time since leaving the Miami Heat.

The new-look Cleveland Cavaliers are possibly better than they were last season. Wade joins forces with a team that added former MVP Derrick Rose, all-star Isaiah Thomas, and other key depth. The Boston Celtics may have given up too much in their trade for point guard Kyrie Irving. In what appears to be a robbery, the Cavs managed to receive a first and second round pick, Thomas, Jae Crowder,  and Ante Zizic. This left Wade with the perfect opportunity to join a team that is easily a title contender. What is better than joining a title contender in a bad Eastern Conference? Joining the best player in basketball that you played with on a title contending team before for another. Wade already has plenty to say about playing again with James.

“It’s like peanut butter jelly. We just go together.”

Wade finalized a one-year. $2.3 million deal. It is safe to say that Wade is done looking for a paycheck and is trying to go out on top. Wade told the media that “there’s no better place right now” to play and compete at the highest level possible. ‘Father Prime’ did reiterate that he still wants to eventually return to the Miami Heat and retire. He may be in his last years of his professional career, but Wade still has plenty of basketball IQ and leadership to offer on the basketball court.