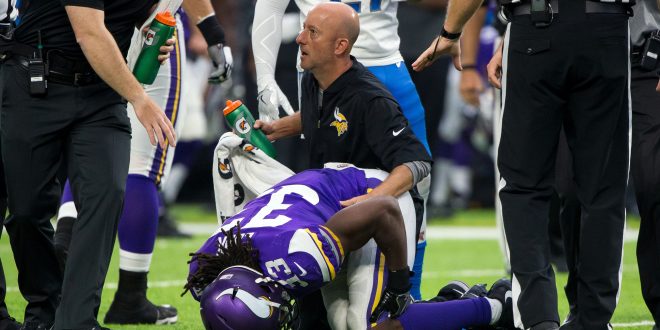 During Week 4 of the 2017 NFL season, there were significant injuries, surprising finishes and close games.

After this Sunday’s games of Week 4 in the 2017 NFL season, there are a significant amount of key players injured. To start off, rookie running back for the Minnesota Vikings and former Florida State Seminole, Dalvin Cook is out for the remainder of the season due to a torn ACL. In the Vikings 14-7 loss against the Detroit Lions, Cook took a handoff from Case Keenum gaining 10-yards up the middle of the field before he went down grabbing his knee in the third quarter. Consequently, fumbling the ball. Head coach Mike Zimmer said, “Cook will undergo surgery and is expected to return next season.” Zimmer told Cook he can still have a great career.

Seattle Seahawks running back, Chris Carson, was also injured on Sunday in the Seahawks 46-18 win over the Indianapolis Colts. During the fourth quarter, Carson injured his left leg after being pinned down by a defender as multiple players piled on. Seattle head coach Pete Carroll said Carson hurt his ankle pretty significantly. Carson’s status still remains questionable.

There were also two very significant injuries for quarterbacks during Sunday’s games. Tennessee Titans quarterback Marcus Mariota was pulled during the third quarter of the game against the Houston Texans. Mariota did not return to the game due to a hamstring injury. Mariota will undergo an MRI on Monday. Oakland Raiders quarterback Derek Carr did not return to their game against the Denver Broncos on Sunday after injuring his back during the third quarter. After twisting awkwardly while being sacked, Carr reached for his back immediately. Carr had back spasms and will undergo an MRI. It’s interesting to note that during the 2016 NFL season, both Mariota and Carr were injured on the exact same day again.

Surprises in the 2017 Season

One of the biggest surprises this season, is the New England Patriots record. The Patriots are currently 2-2 and have one of the worst defenses in the league. This was very unexpected after winning the Super Bowl and their 14-2 record last season. During week 4, the Patriots fell to the Carolina Panthers, 33-30. The Panthers racked up 444 yards and 28 first downs against the Patriots defense on Sunday. No one expected the Patriots to be 2-2 heading into Week 5, but there defense might be to blame for this.

Another surprise this season is the Buffalo Bills. The Buffalo Bills finished their 2016 season with a 7-9 record. Four weeks in and the Bills are already 3-1. The Bills defeated the Atlanta Falcons, who were undefeated, on Sunday 23-17. A reason for this is their surprisingly good defense this season. The Falcons had 3 turnovers against the Bills defense. Buffalo head coach Sean McDermott believes the defensive players and coaches were on the top of their game.

Sydney is a senior studying telecommunications with a specialization in sports media at the University of Florida. She is a multimedia sports reporter for ESPN 98.1 FM/850 AM WRUF and WUFT-TV.
Previous Marlins’ Stanton narrowly misses 60 HRs
Next Gators Soccer take down Georgia