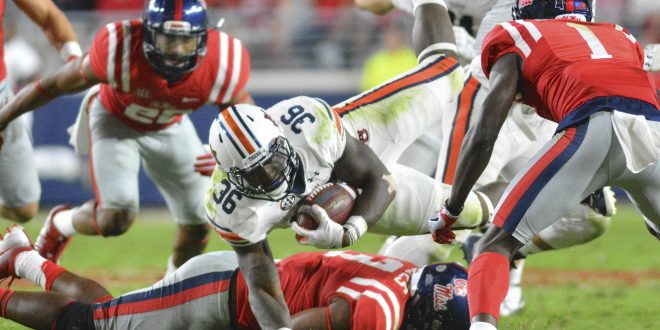 Ole Miss will travel to the state of Alabama for a second straight week, but this time, they’ll seek a better outcome following a 66-3 road loss to the Crimson Tide. This week, the Rebels will take on the No. 12 Auburn Tigers in an early Saturday SEC West matchup. Last season, Auburn emerged victorious, as they took down Ole Miss 40-29 in Oxford, and they hold the lead in the all-time series.

The Tigers had better fortune last Saturday, as they claimed a 49-10 conference win against Mississippi State (ranked No. 24 at the time) and picked up their fourth victory of the season. With that win, Auburn moved up a spot in the overall rankings and also moved up in the defensive rankings, sitting at ninth overall and third in the SEC. On the flip side, Ole Miss has a top passing attack, coming in eighth overall and best in the SEC. But, quarterback Shea Patterson and his receivers will have their work cut out for them Saturday.

Bouncing Back Against Auburn

Against the Tide, the Rebels allowed 613 total yards and 365 yards on the ground. Offensively, they went 0-for-13 on third down and 0-for-2 on fourth down. Ole Miss also gave up two turnovers, both of which came from Patterson’s two interceptions. Head coach Matt Luke talked about dealing with a lopsided loss and what the right approach to that is.

The Rebels weren’t able to produce much offense against the Tide, and those two turnovers didn’t help their cause. Ole Miss produced 230 total yards and 165 through the air. On defense, they’ve allowed an average of 35.8 points per game and 430 yards overall, with 229.3 yards coming from opposing rushers. Luke said a team like Alabama doesn’t give teams much room for error and will capitalize on their mistakes.

Though Auburn and Ole Miss will kickoff before noon, Luke said the early start shouldn’t change their plan, and he’s looking forward to the challenge.

Auburn held Mississippi State quarterback Nick Fitzgerald to 157 passing yards, and he completed only 13 of 33 passes against the Tigers. Second year quarterback Patterson leads the SEC in passing yards and is 10th in the nation in the same category with 1,446 through the air. Auburn head coach Gus Malzahn credited the Rebels’ offense, especially Patterson.

Though Alabama held Patterson to 165 passing yards and allowed him to complete just 14 of 29 passes, he still poses a threat on offense. Patterson also has the services of the top two leaders in receiving yards in the SEC. Receivers A.J. Brown and DaMarkus Lodge lead the conference and have 395 and 356 yards, respectively. Brown averages 23.24 yards per reception while Lodge averages 20.94 yards per catch. However, neither receiver had a touchdown reception against the Tide.

Malzahn said his defense is confident, though, going into Saturday’s matchup against the Rebels’ offense.

Sophomore transfer Jarrett Stidham struggled early on in the season, especially during a 14-6 road loss against Clemson when he was held to 79 yards and sacked 11 times. But, he improved as the games went on, and now Stidham has a 72.03 completion percentage and is fourth in the SEC in passing yards with 1,110. Against Mississippi State, he finished 13 of 16 for 264 yards and had two touchdowns. With an impressive outing against the Bulldogs, Stidham now has five touchdowns overall.

Malzahn talked about his offensive line and keeping the pocket clean for Stidham on Saturday.

Auburn will look to win its second straight and seventh of their last nine against Ole Miss. Kickoff in Auburn is set for noon ET on the SEC Network.