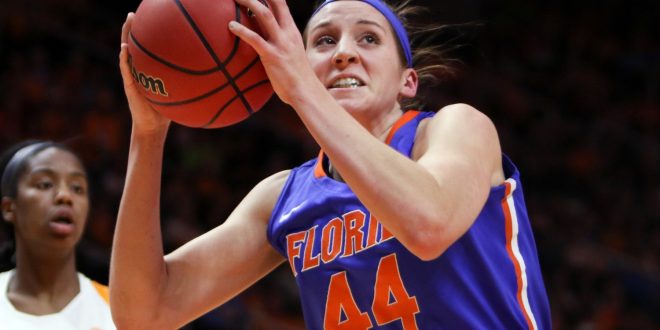 Senior Haley Lorenzen’s successful college career has been nothing short of what was expected of her, and she plans to continue the success for her senior season.  Growing up with two parents who were both college athletes, it’s no surprise that Lorenzen continues to lead the University of Florida’s Women’s Basketball Team.

Even getting a new coach in her fourth season at UF isn’t negatively affecting her game. According to Lorenzen, the change from a female to a male coach is definitely different, but is just something that the team is going to have to adjust to.  While growing up in Iowa, most of her coaches were men, so this is something that she is used to.  The only thing she is taking into consideration regarding this transition is that some of her other teammates may need to adjust to the way they interpret and process things that new Head Coach Cameron Newbauer says in comparison to the previous coach, Amanda Butler.

Lorenzen seems to be a passionate leader for her team.  She wants to set a good example, especially for the new girls coming in. She says that one of the most important aspects of the team is to embrace the “family culture”.

Her main goals for herself this season is to just do well enough to be able to continue her basketball career next year. As for the team as a whole, the goals, as usual, are to win a championship and have a winning season. She wasn’t necessarily pleased with the team’s results from last year, so she has high expectations for the upcoming season. Lorenzen has a good outlook on the new players, and believes that they will make a difference for the team.

As a role model to the new girls coming in, Lorenzen has made sure to take extra time to help and encourage her new teammates. When asked about what she has told the new freshman, she says that she has been telling them to “take a deep breath” and that it’s “okay to make mistakes.” She understands how they feel, because she was in their shoes just three years prior.

When asked about Haley, the first thing that Coach Newbauer describes her as is “super skilled.” He mentions how she has taken on the leadership role for the team and has become a very caring servant leader, is selfless and has opened up and become vulnerable with the team. In Newbauer’s opinion. these things, along with the hard work she puts in, are what makes a successful leader.

Newbauer has nothing but good things to say about Lorenzen and predicts that she will have a “very successful year”.