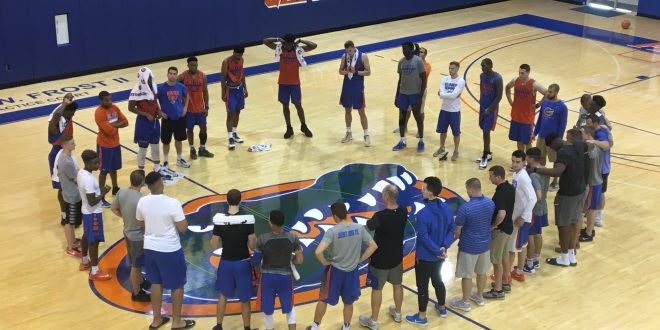 Mike White and Co. shined offensively in the first open practice of the season on Thursday afternoon. Whether it was a three-point floater from Chiozza or a thunderous dunk from Kevarrius Hayes, the team looked like they’d been playing together for years. Shots were falling, screens were set at the right location and passes were crisp and on time.

It would be incorrect to say that the team’s defensive showing was poor on Thursday afternoon, especially as only 30 minutes of practice were open to the media. Nevertheless, the offense certainly outplayed the defense no matter the unit or combination of players.

Don't think I've ever seen this before from Chiozza pic.twitter.com/waxzoCWN3s

2. Mike White talks about the role Egor Koulechov has on the team and his position in the locker room.

7. Mike White talks about the improvement of the SEC from last season to this season.

9. Mike White talks about his team’s wings and their potential roles.