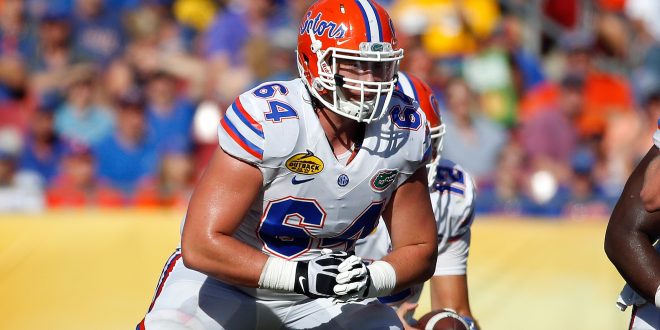 Florida fans are disappointed in the Gator football team’s 16-17 loss to LSU last weekend. The team, on the other hand, is focusing on the future. Junior offensive lineman Tyler Jordan says the Gators are ultimately a better team than the Tigers, despite offensive mistakes last weekend. This is Jordan’s third year with the Gators and he is experienced at right guard, left guard, and center. Jordan was a primary starter last season when he was healthy and has started on several occasions this year, as well. He was brought into the LSU matchup after halftime on Saturday. Moving past last weekend, Jordan said in a press conference, the Gators are focusing on defeating the Texas A&M Aggies.

Offensive lineman Tyler Jordan: "After the play is over, we've got to push the pace. That's something we've got to do better." pic.twitter.com/3wpMepJyuo

Jordan commented on several offensive mistakes and imperfections he believes the Gators can work on moving forward. He noted that offensive play has been very inconsistent for the Gators saying,

“Some series, you’ll see it where we get up to the ball and we’re rolling and we move the ball efficiently. And then there’s other times when we’re kind of slow getting to the ball and then the series doesn’t fold out as well as we wanted it to.”

Taking that into account, Jordan mentioned, the Gators plan out and practice shot calls every week; however, it doesn’t always go the way they have planned. Jordan continued, the plan for the offense in a particular game depends on how the line is playing that day.

Red-shirt Freshman Feleipe Franks (13) has played in all five games this season, including four starts. Jordan says Franks has a lot of talent, but his youth and inexperience in NCAA football hinder his full potential on the field. Still, Jordan commented,

“That’s not an excuse. We’ve gotta go out and we gotta protect better as an offensive line, especially on those big shot plays that we take.”

Head Coach Jim McElwain has made similar comments to the team in practice that Jordan says he takes into account when focusing on his personal improvements.

Jordan acknowledged some specific weaknesses of the offensive line, but expressed his forward-looking and team-oriented mentality. This weekend, the Gators have an opportunity to capitalize on those areas for improvement as they take on the Texas A&M Aggies in the Swamp for the last home game until November 19th.

I grew up in the Washington, DC area and now I'm a Gator. I'll always be learning more about myself, others and the world around me. And I'll always be talking about sports.
@kelsey_godman
Previous Yankees Look to Complete Comeback vs. Top Seeded Indians in Game 5 of the ALDS
Next Isaiah Stokes Looks to Make an Impact on an Experienced Gator Team