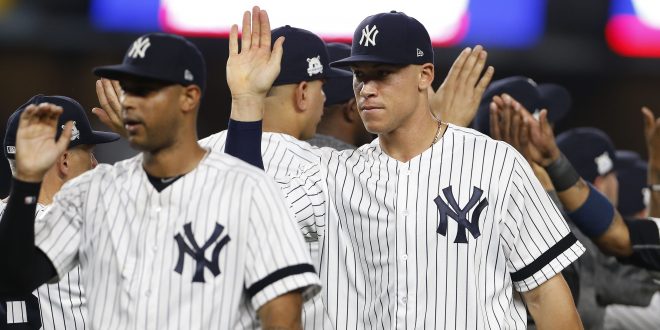 Yankees Look to Complete Comeback vs. Top Seeded Indians in Game 5 of the ALDS

The Cleveland Indians have been here before. Having a strangle hold lead in a playoff series to only see the series tied up heading back to Cleveland. This was the way the Indians finished last season, blowing a 3-1 series lead to the Chicago Cubs in the 2016 World Series. This season, the Indians are on the verge of blowing a commanding 2-0 American League Divisional Series lead to the New York Yankees.

The Baby Bombers of New York have lived up to that name this season. The Yankee hitters lead all of baseball with 241 home runs in the 2017 season. It’s no secret that the Yankee hitters are swinging for the fences every time up. The Yankee hitters stroke out a combined 14 times in Game 1 and 12 times in Game 2. The strikeout numbers are always high with a powerful hitting lineup. In both games in Cleveland, the Yankees weren’t patient on their pitches, which lead to drawing less walks. In the last two Yankee wins, the Baby Bombers have matured in the batters box by being more patient with their pitches. They are working the pitch counts in their favor. This is leading to more walks and better opportunities to knock the baseball into the stratosphere.

The history of Cleveland sports is filled with “what could’ve been’s.” With the recent resurgence of the Indians and their neighbors the Cavaliers, Cleveland sports is experiencing the most winning the city has seen in a very long time. After losing two in the Bronx, the “Cleveland curse” is starting to loom once again. After two strong performances at home to take a 2-0 series lead, the question becomes: What has gone wrong for the Indians? The Indian bats can seem to get going the way they were at the beginning of the series. Striking out 12 times in Game 3 striking out 14 times in Game 4. In those two losses, the Indians totaled nine hits. The pitching from Cleveland hasn’t helped either. They have allowed the Yankee bat to come to life.

In Game 5, both teams appear to have taken similar approaches in choosing their starting pitchers. The Yankees will send CC Sabathia to the hill. Sabathia had a respectable start in Game 2. The former Indian allowed four runs on three hits while striking out five in five and a third innings of work. The mindset for Girardi to turn to Sabathia has to be his experience in a hostile road environment in the playoffs. Sabathia is also undefeated in seven starts in the ALDS. For Cleveland, manager Terry Francona will look to his ace Corey Kluber to improve a lackluster performance in Game 2. Kluber struggled in only two and two third innings of work, giving up six runs. The thought process for Francona has to be that he trust his ace to turn it around and prevent history from repeating itself.

First pitch from Progressive Field in Cleveland is set for 8:08 p.m.