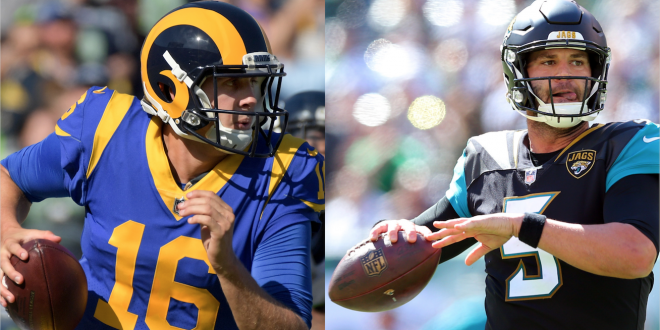 Game Preview: Who will come out on top in the LA Rams and Jacksonville Jaguar game?

As we enter Week 6 both of these teams are preparing to fight for the 3-3 record. The Rams are coming in from their 10-16 loss to the Seattle Seahawks while the Jaguars are entering from their surprising 30-9 win against the Steelers.

Last week in their loss the Rams offensively struggled to follow through. The team also turned over there ball five times. Jared Goff, the Rams QB, said in the postgame press conference “It wasn’t so much we weren’t moving the ball, we just weren’t finishing the drives.” Although Goff struggled last week, he has shown he is capable of making major plays for the offense.

Rams safety Lamarcus Joyner, a key player in their secondary, has returned to limited practice and is likely to play on Sunday. Joyner is great at putting pressure on his opponents and will certainly be a force Jaguar quarterback, Blake Bortles, should keep in mind.

Similar to the Rams the Jaguars offense have shown their offense is a work in progress. Against the Steelers Blake Bortles, Jaguars’ quarterback, threw the ball 14 times with 8 completions for total of 95 yards. Bortles now holds the record, previously held by Blaine Gabbert, for the lowest amount of yards that ended in victory. The four year veteran has continued to be hot and cold throughout the 2017 season and says he understands fans see “we’ve gone up down up down so thats kinda been what everyone is talking about is inconsistency or lack of consistency”. It’s hard to predict whether the offensive line will be able to match Goff’s potential on the field.

One major threat on the Jaguar offensive line is rookie running back, Leonard Fournette. Right now Fournette has the second most rushing yards in the league. Additionally, the Jaguars are No.1 in team rushing yards. So it’s going to be up to the Rams defense to challenge the Jaguars impressive running game. Look at Fournette go for a 90 yard TD last week.

Hey @EAMaddenNFL, we think @_fournette needs a bump in speed during your next update. #WinToday pic.twitter.com/q4PQxw9x3E

What to Expect Sunday

As both teams have shown improvements throughout the first five games of the season, they’re both hurting offensively. Many predictions are expecting this to be a close game. It’s uncertain what they’ll do offensively, but the Jaguar defense proved with two pick sixes last week their ready to make game winning plays for Jacksonville.

A win for the Rams would make them 4-1 in Jaguar territory. A win for the Jags would be the first time they’ve won a home game in almost ten months.

Watch the teams go head to head on Sunday in Jacksonville on Fox at 4:05 p.m.

Previous Florida Volleyball Prepares For Potential Trap Game
Next Around the NFL: A Spectrum of Headlines and Criticisms