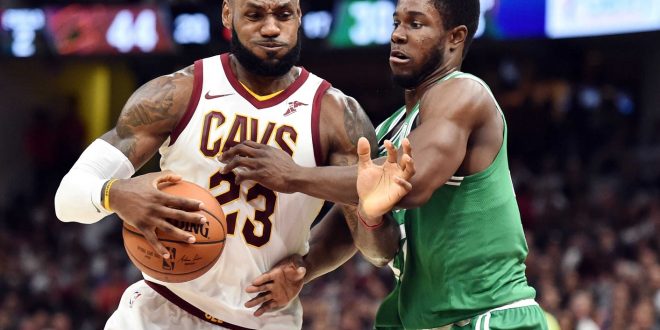 LeBron James: “The Chosen One”

Shortly after dropping 29 points and going 12-19 from the field, along with 16 rebounds and 9 assists, LeBron James’ first words were, “I’m out of shape.”

“Very out of shape for my expectations,” James continued.

Understandable, considering the four-time league MVP barely played in the NBA preseason. James was sidelined by an ankle injury for most of Cleveland’s preliminary games, prompting the Cavs to lose five straight. Despite the 1-5 start, James returned to action last night and led the Cavaliers to a 102-99 season-opening victory over the Boston Celtics. Both teams are obviously rusty, essentially sporting entirely new rosters compared to last season’s Eastern Conference Final.

Meanwhile, Cleveland added former MVP Derrick Rose and twelve-time NBA All-Star Dwyane Wade. Boston made some free agency moves of their own, signing Gordon Hayward to secure their place in the East. However, Hayward’s unfortunate ankle dislocation and tibial fracture will most likely rule him out for the rest of the season.

LeBron “out of shape”?

Most players would be happy with 29 points and a statline that was one assist shy of a triple-double, especially in the season-opener.

As he’s proven time and time again, LeBron James is not like most players. Take last night, for example, after beating the Celtics and proving his team can win without Kyrie Irving, James decided to work on his cardio.

It’s hard for most human beings to comprehend this level of work ethic, because most have never pushed themselves to the physical limits required to play professional sports. It’s one thing to play 41 minutes and orchestrate a victory against one of the NBA’s best teams, but adding in a workout session afterwards is unheard of.

That’s what it takes to be the best, and make no mistake about it – in his 15th season, LeBron James is still the best. While many shrug off his freakish athleticism and assume he was born this way, there is no way to quantify the amount of time and effort James has spent perfecting his craft. The classic under-appreciation of his hard work reminds me of an old Jordan commercial, “Maybe It’s My Fault.”

Maybe it’s my fault that you didn’t see that failure gave me strength, that my pain was my motivation. Maybe I led you to believe that basketball was a God-given gift, and not something I worked for – every single day of my life. Maybe I destroyed the game. Or maybe you’re just making excuses.”

In his 15th season, after being labeled as “The Chosen One” on a 2002 cover of Sports Illustrated, LeBron James still plays like a kid from Akron, Ohio.

That’s what separates players like Jordan and James from the rest: they love what they do and they outwork everybody else, regardless of how they’re labeled by others.

If an 18-year-old LeBron had listened to the “experts” who said he was the best, he may not have actually reached that pinnacle. If he had listened to the naysayers who discredited both his talent and decisions when he chose to leave Cleveland, he wouldn’t be the LeBron James we know and love today.

Instead, James listened to himself, and over the years, we’ve seen him blossom into one of the greatest athletes to ever live. Love him or hate him, there is a certain amount of respect that must be afforded to James.

After all, he’s earned it.