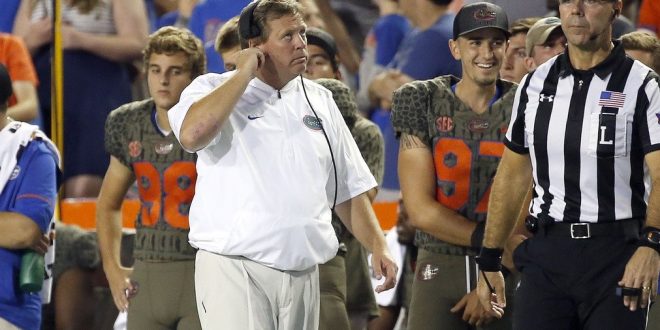 The bye-week for the Florida Gator football team couldn’t have come at a better time. Not just one, but many players are out of practice this week with injuries, according to head coach Jim McElwain. The most devastating of them all might be defensive-lineman Jordan Sherit, who has been ruled out with a season-ending injury.

The red-shirt senior just underwent hip surgery and will be a huge loss for the Florida Gators. Sherit has battled multiple injuries in the past, but none have been as bad as this. Last season, Sherit totaled 38 tackles, 3.5 sacks and two quarterback hurries.

Sherit isn’t the only one who will be missing playing time. Two defensive backs, Quincy Lenton and Nick Washington, are also out this week with injuries. Then there’s Tyrie Cleveland, Chauncey Gardner, Martez Ivey, and Kadarius Toney.

Coach McElwain says he has various players injured, but is still trying to stay positive.

McElwain says he’s never been down this many players before, but acknowledges that those who can play, are playing strong.

The Odds Against Florida

After this weekend the Gators head into one of their biggest rivalry games, Florida/Georgia.  As of now, Coach McElwain is uncertain when his injured players are coming back.

With all of the injuries, Coach McElwain says “it is what it is,” when putting together a depth chart for the upcoming games. McElwain also acknowledges the fact that Florida has trouble coming out on top in the fourth quarter.  He says they don’t do a good enough job at staying unexposed and placing players where they need to be, but it takes some imagination when it comes to multiple injuries.

The odds may be against the Gators as they take on the Georgia Bulldogs next Saturday in Jacksonville, but the team and McElwain are trying to stay positive. Coach Mac says with the guys he’s able to use, the team works on strengthening their skills every week.

What's the most important thing Florida needs to work on over the bye week in order to beat Georgia?

Previous LeBron James: “The Chosen One”
Next Preview: Buchholz at Oakleaf