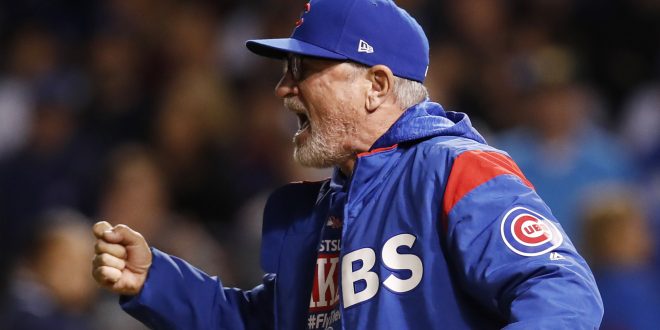 Two championship series were featured Wednesday night. In the American League, the New York Yankees utilized the momentum they’ve built at home to blank the Houston Astros by a score of 5-0. In the National League, the Chicago Cubs staved off elimination via a 3-2 victory over the Los Angeles Dodgers.

Houston starting pitcher Dallas Keuchel had only allowed one earned run in two postseason starts entering Wednesday’s game. In Game 5, he would not find the same success. The Yankees struck early in the second inning with a RBI single from first baseman Greg Bird to take a 1-0 lead.

Right fielder Aaron Judge made the score 2-0 in the third inning via an RBI double. All the meanwhile, the Houston offense was colder than the mid-October New York air.

The Yankees broke the game open in the fifth inning with a pair of RBI singles from catcher Gary Sanchez and shortstop Didi Gregorius to extend the lead to 4-0. Keuchel would exit the game following Gregorius’ at-bat. Sanchez would later add a solo homer in the seventh inning, scoring the eventual final run of the game and making the score 5-0.

Reliever Tommy Kahnle would come in to shut the door on the Astros’ Game 5 hopes. He tossed scoreless eighth and ninth innings giving up just one hit in the process. The Yankees are now 6-0 in games at home this postseason.

Chicago entered Wednesday night in the most desperate situation of teams remaining in the playoffs. With their backs against the wall, down 3-0 in the series, they responded with a gritty 3-2 victory at home over the Dodgers.

The Cubs scored two of their three runs in the second inning via a pair of solo homers from catcher Willson Contreras and second baseman Javier Baez.

Los Angeles would respond in the third inning with a solo homer from first baseman Cody Bellinger off of Cubs starter Jake Arrieta, cutting the deficit to 2-1.

The Cubs extended their lead to 3-1 after a second solo homer from Baez in the fifth inning. Entering Wednesday night, Baez was in an 0-for-20 postseason slump.

With Wade Davis on the mound for Chicago in the eighth inning, the Dodgers did their best to respond. Third baseman Justin Turner led off with a solo homer, making the score 3-2. Right fielder Yasiel Puig then walked to put the tying run on first for Los Angeles.

Following a Dodgers out, left fielder Curtis Granderson appeared to strike out swinging for what would’ve been the second out of the inning. However, Granderson argued he tipped the pitch and following a conference between all six umpires, the call was reversed.

That’s when Cubs manager Joe Maddon jumped out of the dugout and was ejected for the second time in the NLCS after an animated argument with officials. After the game, Maddon criticized the process by which the call was made and said a bad missed call can’t happen in that situation.

Davis would go on to get out of the eighth inning and finish out the close in the ninth. The Cubs and Dodgers will square off in Game 5 tonight in Chicago at 8 p.m.