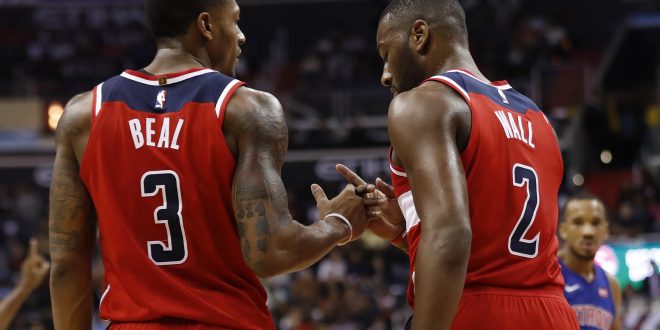 Surprising Outcomes for the First Week in the NBA

Week 1 of the NBA season proved to be nothing short of the unexpected, especially in the Eastern Conference. While the East does not have the same level of competition as the West, there were still some shocking outcomes.

First, who would expect that the Wizards would be the top team record wise in the Eastern Conference. Washington is currently 3-0 after defeating the Philadelphia 76ers, the Detroit Pistons and the Denver Nuggets. Granted they have not had a challenging opponent yet; however, it is still surprising to see Washington on top after losing in the second round of the playoffs last season. This is the team’s fourth time going 3-0 at the start of the season in the team’s last 57 seasons. Now the Wizards look to become the second team in franchise history to go 4-0 as they prepare to face the Lakers on Wednesday.

Walking off with a road W! Next stop, L.A. #DCFamily pic.twitter.com/rjKDi8oGQX

Finalist sitting at No.6 in the East

While the Cleveland Cavaliers are trying to acclimate new players on the team, Cleveland’s Week 1 performance was subpar. In the season opener against Celtics, the Cavaliers were barely able to obtain a W despite the fact that Boston tragically lost Gordon Hayward just minutes into the game. Even more so, on Saturday night, Cleveland took a 21-point loss to the Orlando Magic, a team that has not made it to the playoffs since the 2011-2012 season. This was the first time in 17 games that Orlando beat Cleveland.

With the Cavs off to a rocky start, Dwyane Wade asked to be a regular back up for the first time in his career. Wade says that he came to Cleveland to win and he wants to do whatever he can to help his team succeed even if it means not being a starter.

Orlando’s Start to the Season

Orlando’s first game of the season was a great win against the Miami Heat. While the Heat has missed the playoffs for three consecutive year despite being 41-41, the odds of Miami winning its season opener were favorable. After Orlando’s fifth consecutive miss to the playoffs, it is refreshing to see the team begin well. Maybe Miami has bad luck playing in Orlando or maybe the Magic’s postive on the court dynamic has helped the team. Either way, the team’s success gave them the momentum to defeat the Cavs by 21 points Saturday night.

The Magic have proved to be more resilient and unifed as a team just within the first week. Mario Hezonja is becoming more and more of a dynamic offensive player. With shooting 4-of-5 from the field and successfully making all of his 3-point attempts, he is definitely making a postive impact on the team.