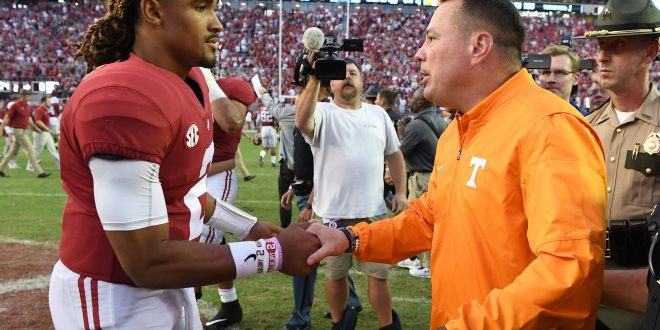 What Happened This Week in the SEC?

Five SEC teams (Florida, Georgia, South Carolina, Vanderbilt, and Texas A&M) were on a bye this week, so it was a down week for SEC football. The matchups that took place this week were not as thrilling as usual, with no game ending in a single-digit deficit.

Alabama dominated the game from wire to wire, finishing with a 45-7 victory over the slumping Volunteers. No one can seem to slow down the top team in the country, who ended up playing their reserves for most of the second half. The Crimson Tide outgained the Volunteers 604-108 in total yards. Alabama produced a balanced attack by rushing for 272 yards and four touchdowns and adding another 332 yards and two touchdowns in the air. Tennessee hadn’t scored a touchdown in over 12 quarters of game action until Daniel Bituli returned a 97-yard interception for a touchdown in the third quarter. The two organizations are headed in opposite directions: Tennessee continues to freefall while Alabama continues to steamroll through college football.

Another year.
Another cigar.

It's been 4,018 days since Alabama lost to Tennessee. pic.twitter.com/UnLkyAWI5G

The Tigers bounced back after a disappointing loss to LSU last week by defeating Arkansas 52-20. Auburn went into halftime with an 11-point lead, but a dominant third quarter blew the game open for the Tigers. They outgained the Razorbacks 629-334 in total yards. The Tigers did most of their damage on the ground by rushing for 345 yards and five touchdowns. Arkansas lost three fumbles on the day, and struggled to get anything going offensively.

This play sums up the game perfectly for the Razorbacks, and yes, there were only nine players on the field.

LSU running back Derrius Guice had the breakout performance everyone has been waiting for this season by rushing for 276 yards and a touchdown. This dominant performance by the junior led the Tigers to a 40-24 victory over Ole Miss. Darrell Williams added 103 yards on the ground and 105 yards in the air for LSU. Jordan Wilkins was the bright spot for the Rebels, rushing for 86 yards and a touchdown. Ole Miss quarterback Shea Patterson threw three interceptions on the day. LSU has now won three straight games after losing to Troy. The Tigers look to continue to rise in the college rankings as they head to Tuscaloosa to face number one Alabama next week.

Derrius Guice is the first player in SEC history with three 250-yard rushing games in his career. pic.twitter.com/GcUoNAdSJP

Mississippi State dominated Kentucky from start to finish on Saturday as the Bulldogs rolled over the Wildcats by a score of 45-7. Mississippi State quarterback Nick Fitzgerald threw for 155 yards and a touchdown and ran for another 115 yards and two touchdowns. The Bulldog defense forced two turnovers (one pick-six), three sacks, and seven tackles-for-loss. No Kentucky running back or receiver totaled over 55 yards on the day, and they managed only 260 total yards of offense.

Florida Gators head coach Jim McElwain said in a press conference on Monday that the team and the families of players have been receiving some death threats for their lackluster performance this season. “There’s a lot of hate in this world and a lot of anger, and yet it’s freedom to show it. The hard part is obviously when the threats [are] against your own players, the death threats to your families, the ill will that is brought upon out there.” The Gators head to Jacksonville this weekend to take on third-ranked Georgia in the World’s Largest Outdoor Cocktail Party.