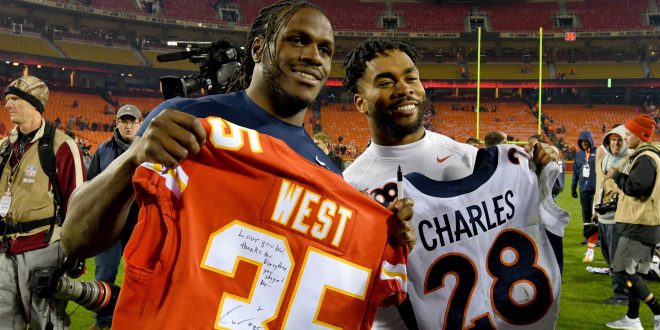 The Kansas City Chiefs were off to one of the hottest starts in football. Through five weeks they were an undefeated team. They faced the Raiders and Steelers in their last two match ups and lost two games in a row. Coming into this game against the Broncos the Chiefs were desperately looking to avoid losing three in a row, especially in a conference matchup with the Broncos. The Broncos, on the other hand, are second in the AFC East despite coming into this game at 3-3. The Broncos first two games of the season showed glimpses of their potential. Since then they are on a three game losing streak (after this loss to the Chiefs) and are dropping games to mediocre teams. The glaring points to take out of this game is that the Broncos have a major quarterback issue and that the Chiefs defense can win them games. Although a somewhat sloppy game at times, the Chiefs beat the Broncos with a final score of 29-19.

After Payton Manning retired in 2016, the Broncos replaced him with Trevor Siemian. Siemian only in his third year has shown some signs of life. With a career completion percentage of around 60%, he can get the ball to his weapons. Siemian struggles with protecting the football. He throws a lot of interceptions and they usually come on throws that leave viewers wondering “why did he even throw that”. This was a glaring issue with the Broncos efforts this Monday. Siemian threw three interceptions to one touchdown, not a very favorable ratio. Siemian threw 19/36 and didn’t break 200 yards in the game. On top of his lackluster performance, Jamaal Charles fumbled the ball returned for a touchdown. 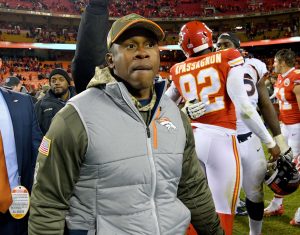 Throughout the season Denver has struggled to figure out what their offense is. Apart from Siemian being a sub-par quarterback their running back issues are hindering the team as well. Despite having three worthy candidates in C.J. Anderson, Devontae Booker and Jamaal Charles the Broncos still don’t have a #1 guy. Last night none of these three players could break 100 yards rushing. C.J. Anderson got a majority of the touches (15) and could only muster 78 yards on the night. The offense is scrambling to find yards and touchdowns. After this performance Siemian is firmly on the hot seat along with Vance Joseph. Do not be surprised if the Broncos start looking for a new quarterback. Joseph highlighted their turnover issue after the game. 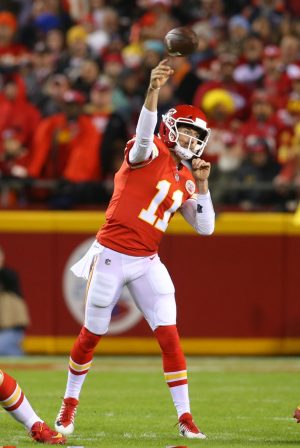 The Chiefs offense was somewhat shaky in this matchup. There were a couple drives that they couldn’t get anything going on. This gave the Broncos some life and kept them in the game for a little longer than expected. Once they found their rhythm, Alex Smith began picking apart the Broncos defense. Big plays from Travis Kelce and Tyreek Hill sparked their offense. The stat sheet is shallow in this one. Kelce got 133 yards on seven catches and a touchdown. Hill got 38 yards on two catches. Kareem Hunt got involved from the backfield with 22 yards over the air. Demarcus Robinson and Charcandrick West each had one catch. Using minimal options Alex Smith managed to throw for 202 yards. Although his numbers weren’t the greatest he lead his team to victory with a lot of help from the defense. Smith threw 14/31 with no interceptions. On a head scratching trick play Tyreek Hill threw an interception in the end zone. Smith commented on their red zone efficiency.

After a first few hot weeks from Kareem Hunt, the Chiefs running production has slowed down. The rookie came out of the gates blazing. In the first five weeks he only had one game with less than 100 yards. Since then Hunt has put up 21, 87 and now 46 yards in each of his past three games. Despite a couple slow games he still averages 5.2 yards per carry. A young, promising talent, the Chiefs don’t have much to worry about with Hunt’s recent struggles. In this past matchup against the Broncos, Hunt ran the ball 22 times. Hunt only produced 46 yards on those carries making this his second worst game of the season. However, Hunt manages to get involved in the passing game. Alex Smith almost ran the ball for as much yards as Hunt. It’s worthy to note that Hunt increasing his production will open up opportunities downfield for Smith and his receiving weapons.

The Chiefs defense started this game with intentions of forcing turnovers. On the Broncos first drive they stripped Jamaal Charles for a fumble and returned that for a touchdown. On the Broncos next drive the Chiefs intercept Siemian on a terrible throw towards the sideline. The Chiefs defensive line was bringing the pressure all night. They managed three sacks on the night with six hits on the quarterback. The special teams unit also jumped in on the turnover feast, recovering a fumble on a muffed punt. Kansas City ended the game with their third interception coming late in the fourth quarter. This stifled a last minute Broncos run and deflated their entire team after a night full of turnovers. 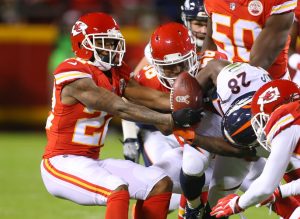 Dylan Glicksman is a second year Sports/Media Journalism major at the University of Florida, out of Melbourne Beach, FL.
Previous Rock You Like A Hurricane: Gainesville Routs Lake Weir 41-0
Next Quick Look at Florida NBA Teams 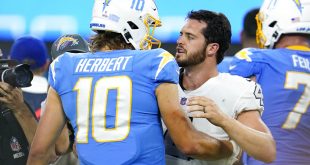